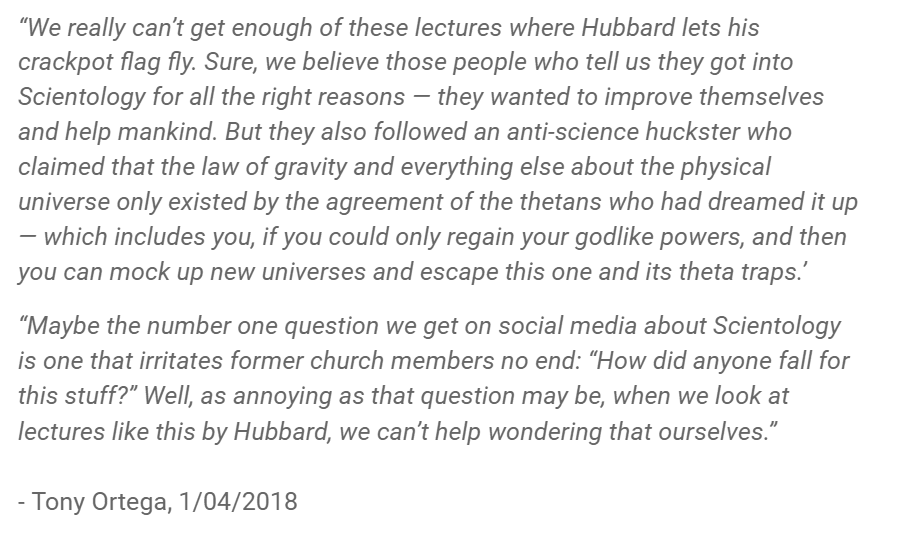 Don’t get me wrong, there is definitely some whacked out stuff in Scientology. I’ve spent most of the last 18 years writing about it.

But here we have one of Tony Ortega’s specialties: cherry-picking the craziest and most abusive parts of Scientology, and assigning those characteristics to all of Scientology and to all Scientologists – now even including you as an Ex.

It’s the subtext of almost everything he writes about Scientology. But now he is letting his subtext become his text. This shows an important change in Tony Ortega’s editorial policy.

Back-channel though, my personal interactions with Tony Ortega told me that his deprecations and denigrations weren’t just good fun, he was serious. It became very clear to me that he really didn’t like Scientology and Scientologists, and apparently pretty much everyone who has ever followed any religion.

But Tony needed Ex-Scientologists to continue to follow him, to work to get him quotes, to explain Scientology to him, and to help him do his research so he could continue to “expose” it. So, with my back-channel interactions with him, I began to see Tony holding up a public face on his blog that was much less severe, and much less honest, about his true feelings on the subject of Scientology and the people associated with it.

I get it. He’s an atheist who has such certainty that he has all the answers that he can decide – and can even insist that you decide – that all religions are false, and that they do nothing constructive. He can assert his certainty of faith that religions enslave people and drain everything of value out of them.

And so here he was onto Scientology, a small rapacious cult with big stars and bigger craziness. And then there was this crowd of Ex-Scientologists who had come out, risking fair game and disconnection to criticize and expose the abuses they witnessed while in Scientology when most media was still cowering in fright of their lawyers. Ortega could create and organize a small following using his training as a journalist and concentrate on this one low-hanging cult, and fully take it out. It was the opportunity of a lifetime for a committed atheist like Tony Ortega.

And it was a great idea. A great way to write and sell a book, and maybe get on TV or in the movies, even. He could rise to the top of these ex-cultists and, ostensibly anyway, “give them a voice”. He could interview celebrity Ex-Scientologists and get the scoop that no other Ex could get. He could whip up the dramatics around Scientology and really clean up – and maybe even do some good for the world.

But there was one problem – he hated these fucking people.

These were the exact kind of theetie-wheetie, new age marshmallow heads who are the real problem with the world; the ones who fall for and forward the weird ideas that religions exploit: spirits and an afterlife and Gods. And Scientologists, even Ex-Scientologists, are the worst of the worst, believing in spaceships and alien civilizations, even chasing engrams and body thetans with emeters, too.

So Tony Ortega had to solve this problem – how could he ingratiate himself with these Ex-Scientologists and get from them what he wanted while not puking all over his laptop from having to deal with them every day?

He came up with a great campaign to drive interest in his crusade and to create an abundance of Exes to exploit: It was a series of posts on the Village Voice Runnin Scared blog called “The Top 25 People Crippling Scientology“. It riveted everyone I knew. I had many conversations with Exes and critics who were laughing at themselves for going to his blog every day, hoping to see if Tony had picked them as the next person crippling Scientology.

I have to admit this all worked on me, too. I can’t tell you the treacly sweet sickness I felt watching myself hoping so hard that Alanzo would be mentioned by him next. All eyes were on him. He became the Critic of Record at the Village Voice – no less. Everyone wanted to help Tony Ortega get his next story, do some kind of research for him, and get their names up there, too.

Like I mentioned above, however, every back-channel communication I had with Tony Ortega included some slight, or outright insult of me that I would have to set aside and ignore, and be properly absorptive of, in order to keep the relationship going. There was a point, though, where what I’d learned in Scientology had to take over: I do not deserve a steady stream of insults and disrespect, and when I am getting that from someone, they need to go from my life.

This was disconnection, yes, but it was the fully justified wog version. You know, the one we all allow.

I didn’t know it at the time, but many other Ex-Scientologists were getting the same treatment from Tony Ortega. It seemed that if he needed you for something, then he would basically slobber all over you. But if you had nothing for him, he let you know how he really felt.

I was torn after that. Here was this guy who was doing such good work for the world in taking down Scientology and exposing its abuses, but who seemed to have no respect whatsoever for me personally or anything I had ever done or experienced. Here was a guy who had outright contempt for me, but I had never done anything to deserve it but be an Ex-Scientology critic, and, I guess, a Scientologist before that. So at that time I just became silent and contributed to his commenting community anything I could.

I shut my mouth about Tony Ortega until 2 things happened in rapid sequence almost 3 years ago: He had Rachel Bernstein psycho-analize and mentally shame Cathy Tweed from quotes he had obtained from her the day after her daughter’s funeral, and then he attacked Marty and Monique Rathbun for dropping their lawsuit against Scientology after 2.5 years. I guess he wanted them to take the Laura Decrescenzo route which Scientology was offering – and which Ray Jeffrey was accepting – and be in court against Scientology for the rest of their lives, or something.

To get an understanding of this 2-faced nature of Tony Ortega, you can see it in the early pro-Marty Tony, and in the later anti-Marty Tony. When Marty Rathbun had what Tony wanted, and before he and Monique dropped their lawsuit, he was nothing but the most supportive – kind of like he acts to Mike Rinder and Leah Remini now. But after Monique dropped her lawsuit, the contemptuous behind-the-scenes Tony Ortega went front-and-center, and the denigration and continuing disrespect that he had for those particular Exes became clear for all to see.

There are many ways that Tony Ortega could have interpreted Marty and Monique’s actions. There are, objectively, many valid ways that they could be interpreted by anyone. But the way Tony Ortega has interpreted them are indicative of Tony’s inner contempt for Marty in particular, but also for all Exes and Scientologists in general.

In the last few years, many Exes and critics have come to have their own experiences of Tony Ortega and his sneering arrogance and contempt. I am not the only one.

So why am I taking the time to write all this?

Because I want to scream this from the fucking roof:

Tony Ortega’s Atheist Hate Flag is not the only way to see Scientology, and to see yourself as an Ex-Scientologist. In fact, the way Tony Ortega sees you and your time in Scientology is incredibly false and damaging for anyone who has gone through Scientology.

I believe that the dominance of Tony Ortega in Scientology-watching is one of the worst things to ever happen to Ex-Scientologists. His contempt for all religious and spiritual pursuits is the last thing Exes need after Scientology. It will NOT help you to figure out yourself and your time in Scientology. In fact, if you adopt his viewpoint on yourself, it can be one of the most damaging things to your psyche ever – WAY more damaging than anything you ever experienced in Scientology.

And so perhaps now you might understand why, seeing things this way, I write so much about Tony Ortega.

Overall, in the process of graduating from Scientology, Tony Ortega’s views and way of seeing Scientology is poison for an Ex-Scientologist.

And it looks like 2018 is going to be his year to vent that poison from his nastysauce duct onto Ex-Scientologists way more overtly than he has been! It used to be vented in little squirts behind the scenes. But now I think he’s going to whip out his atheist hate duct and let it fly!

I say go right ahead on, Tony.

Let us all finally see the real you.