How gullible can some Ex-Scientologists get?

Jon Atack wrote a post on Tony Ortega’s blog, accusing everyone who was ever involved in Scientology of being gullible. I commented about Jon’s broad-brushed generality of anyone who ever called themselves a Scientologist. It gave me the chance to use the word “hootenanny” (twice), and I have been extremely prideful of myself ever since.

Here’s a great example of an Ex-Scientologist being too gullible in the direction of a negative interpretation – not only of Scientology, but of himself as a Scientologist.

Here’s Pete’s “realization” about himself as a Scientologist:

Pete Griffiths is a good person.

It’s as if he is going through some kind of a nightmare about himself and he doesn’t know he is dreaming. He is just accepting what the nightmare is telling him.

Pete! Wake up! There is no way that you were inhumane as a Scientologist! The fact that you got out of Scientology and are doing what you are doing now is evidence that you never accepted any inhumanity in Scientology, and did not yourself become inhumane.

I think Pete’s behavior here shows two of the phases of Ex-Scientology I wrote about a few weeks ago.

The Re-education/Re-interpretation Phase – You begin to see your experiences in Scientology completely differently than when you were a Scientologist. Practicing TRs becomes practicing hypnotism. You interpret the wins and benefits you experienced in Scientology as you simply being brainwashed and delusional. Hubbard’s lies and contradictions in Scientology tech and policy are totally clear to you now and you are learning more and more about how much of a “scam” the whole thing was each and every day. You start to use “scam” and “con” to describe Scientology now.

The Self-Humiliation Phase – You begin to berate yourself for being so stupid and so gullible. All you can see are the lies now. And how stupid you were for having ever gotten yourself involved in Scientology. Your self-confidence and self-esteem are at an all time low.

This is the result of years of dwelling in the daily toxic frustration of the Post-Scientology Internet with so much negativity and with so little hope of justice: You start creating distorted re-interpretations of yourself and your own experiences in Scientology that are so over-the-top negative that they are completely false.

If these distortions were true, that would be one thing. They would be the “hard lessons” you would need to confront about yourself to finally change for the better. But in almost all cases of Exes that I know who go through this phase of Ex-Scientology, their cognitive distortions about themselves and who they were when they were in Scientology are FALSE.

Why tell such destructive lies to yourself?

Who are you helping by this self-hatred and self-denigration?

No one. Least of all yourself.

Stop it. Catch yourself the next time you lie to yourself like this. Ask yourself, “Is that really true?” And work out the actual intimate reality of who you were and what you experienced as a Scientologist – without any distortions or lies.

Take care, and be careful with the stories you tell yourself. 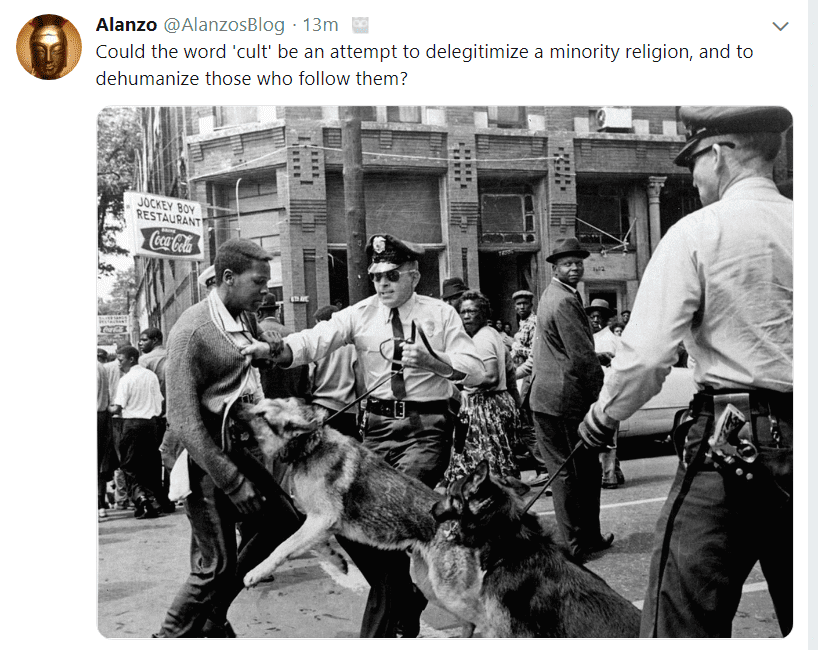 What do we want the day Trump is no longer president??

How many US States will come after Trump with criminal charges?

This is a great time to remind everyone that you can be 100% certain about something that is 100% false.

Certainty is not the result of knowledge, it is a neurological sensation.

We should have never allowed Reagan to break the unions. I'm glad we're finally seeing the destruction this has brought to the lives of 100s of millions of people. https://t.co/uQCNBY5BTK
View on Twitter
0
1
Follow @AlanzosBlog