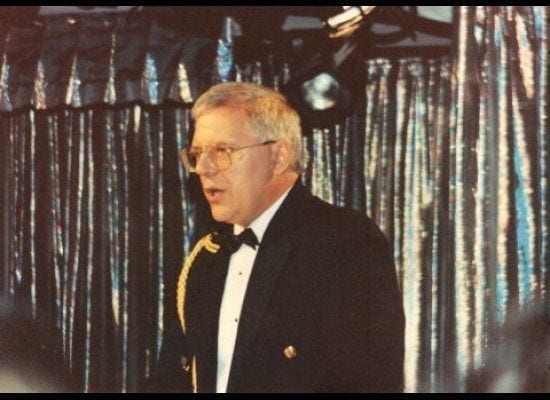 Caption: The President of the Church of Scientology, Heber Jentzsch, is 84 years old now. So let’s call the cops on him!

Episode 2 of Leah Remini and Mike Rinder’s Scientology Fairgame podcast wheels out the familiar assumptions that Celebrity Anti-Scientology wants you to embrace: Everyone is a brainwashed zombie in Scientology, being held against their will. And if you only give them the chance they will run to “freedom” back into the ‘real world’. Because no one could willingly and knowingly choose to be a Scientologist every day.

Just like Scientology offers you claims and assumptions to believe which beg to be questioned, so with Mike Rinder and Leah Remini’s Scientology Fair Game Podcast.

This podcast details an un-aired episode of Scientology and the Aftermath which employed the same hoax they played on David Miscavige’s divorced wife, Shelly Miscavige: Get someone to call the Riverside Sheriff’s office to do a “welfare check” on the 84 year old president of the Church of Scientology so they can claim he’s being held in a fortress prison.

This episode never aired on TV, perhaps because the network thought that one attention-seeking hoax per series was enough.

So I was surprised to find Mike and Leah’s hoaxes being questioned right in the belly of the beast – on Mike Rinders own blog.

Here’s that remarkable discussion which Mike allowed to appear. It questions the assumptions that Mike and Leah want us all to swallow. The much abused “Wynski” makes a very good point before Mike Rinder comes in to tell him he’s stupid.

Give it a read: 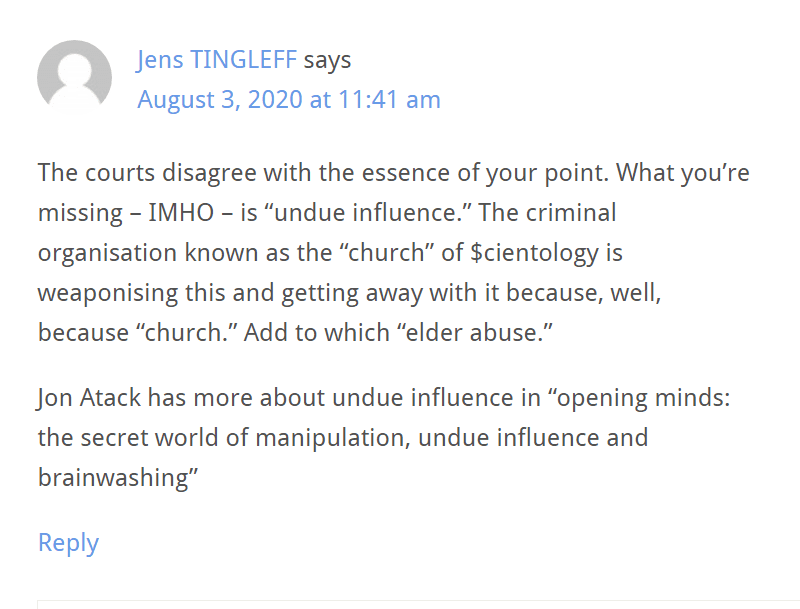 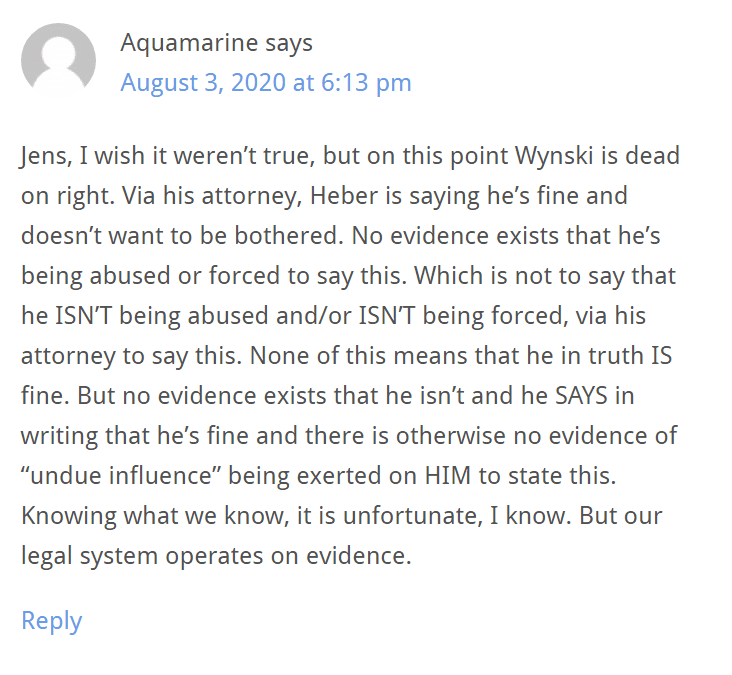 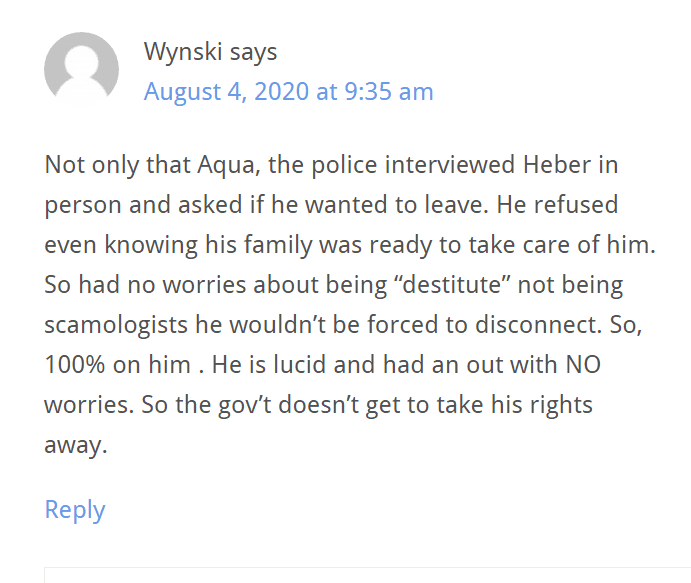 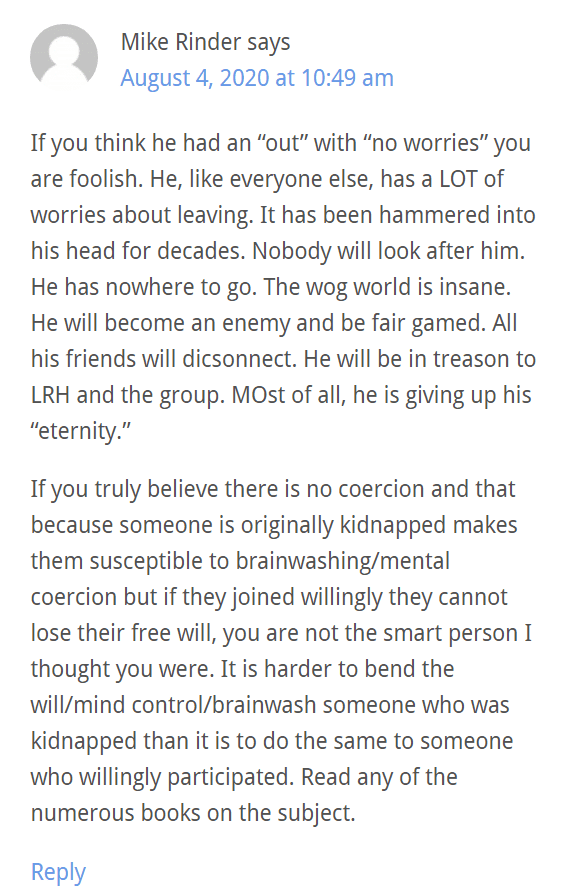 People believe in and write books about witchcraft, too, Mike.

They form covens and cast spells and chant incantations.

But whenever science has studied the effects of witchcraft, it’s found to have NO EFFECT on anything in the real world – just as every scientific study ever performed on ‘brainwashing’ has found it to have NO EFFECT to get anyone to do anything against their own power of choice.

The idea that Heber Jentzsch, President of the Church of Scientology, who willingly left his Mormon family more than 40 years ago and helped to build Scientology into a multi-billion dollar real estate empire would somehow not choose to be a Scientologist is highly questionable – especially compared to the alternative hoax-based idea Mike Rinder and Leah Remini want us to believe.

The very thorough welfare check that the Riverside County Sheriff’s Office conducted bore that out. Just like it did for the hoax they ran on Shelly Miscavige using the Los Angeles Police Department.

You’d think law enforcement agencies in Southern California might be getting pretty sick of Leah Remini and Mike Rinder’s promotional capers by now.

They’ve used these hoaxes to get attention for their TV show, and now for their podcast. And they whip their emotionally manipulated ninnies into a tribal lather for the quixotic crusade ‘to take down Scientology and eradicate it from the face of the earth!‘.

Just like Scientology’s “Let’s Clear the Planet!“, this is another quest that Mike and Leah want us to undertake without question as something that’s desirable for a free society.

The one thing I see of value in this stunt is that it reminded David Micavige that people are watching, and he won’t be able to get away with EVERYTHING he wants to do to Scientologists. Although after 3 seasons of Leah Remini and Mike Rinder’s Scientology and the Aftermath, David Miscavige has never been in a stronger legal position, and he is still more firmly in power than ever.

Overall, I think Leah and Mike need to do a lot more crime exposing, and a lot less hoaxing.

To the surprise of no one, there was a lot of blind moral hypocrisy in this episode of the Scientology Fair Game Podcast. Leah lamented, over and over, about family disconnection and how no one should ever disconnect from anyone in their family. And Mike Rinder, after executing literally thousands of family disconnections as the head of the Office of Special Affairs for 22 years, also decried the horrors of it.

I’ve written about this before, using the billboard sized poster children for Scientology disconnection, Phil and Willie Jones.

But I’ve finally found the underying human principle that shows why this is just more hypocritical moral hand-waiving.

You’ve heard the phrase “blood is thicker than water”?

Turns out, that’s not the whole phrase.

…the original meaning of the expression was that the ties between people who have made a blood covenant (or have shed blood together in battle) were stronger than ties formed by “the water of the womb”, thus “The blood of the covenant is thicker than the water of the womb.”

Meaning, quite often, the family you choose for yourself in life has much stronger ties for you than the one you had no choice but to be born into.

To be moral, should we all be against divorce now? Why isn’t Tony writing articles and posting daily countdown disconnection schedules for Leah’s family, and for everyone who has gotten a divorce?

It’s hard to find any family on Earth that doesn’t have at least one or two members who aren’t talking to each other – who have disconnected from each other – sometimes for their whole lives. This extremely common human behavior has nothing to do with Scientology.

So if Heber, as an adult, wants to disconnect from his Mormon polygamist family in Utah, and go make a new life for himself as a Scientologist – who are these hypocritical Celebrity Anti-Scientologists to question this? Why try to force him back to them, using the cops, and against his own will?

Once again, the blind hypocrisy of Leah Remini and Mike Rinder’s Celebrity Anti-Scientology is gobsmacking.

Leah: Keep up the firey diva outbursts. In future episodes, try to come up with something original after years of being out of Scientology instead of just parroting anticult movement tropes.

Mike: Pull back on the bobble-headed brown-nosing and obsequious squeals. You’re supposed to “say something smart”, as Leah said. Consider some of Wynski’s ideas above on choice vs brainwashing. And cough up an actual crime or two from your days in OSA – will ya?

Your podcast is off to a rocky start, guys. Good on getting a guest, though, and not freewheeling all over the place like you did in your first two episodes.

I think if you present real fair game activies that actually put David Miscavige or any officer of the Church of Scientology into criminal jeopardy, you might get that federal investigation you have pretended to want, or maybe even that review of Scientology’s tax exempt status.

Until then, keep jerking our chains!

See ya next episode. 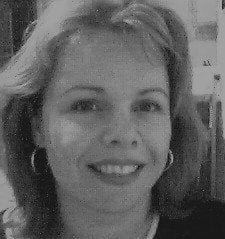 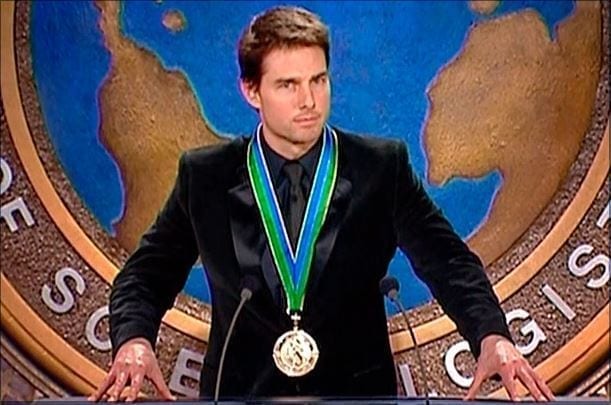