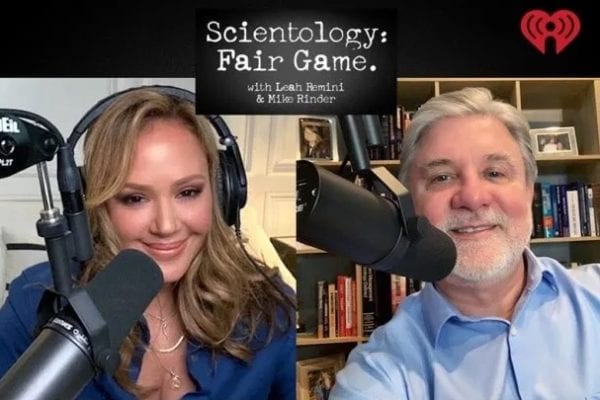 Under the pretense that they are really trying to get a federal investigation of the Church of Scientology, and that they actually want its tax exemption revoked, Mike Rinder and Leah Remini play a game where they ask listeners to send them questions that they can answer on their show. In the past such questions have included where Leah got her accent from and whether Mike has any pets.

It’s such a fan favorite they’ve done it again for an upcoming episode.

But when I try to get them questions to answer on their podcast, my comments always seem to get deleted on Mike’s blog.

So I’ll publish them here.

These are questions that Mike Rinder and Leah Remini will never address on their Scientology: Fair Game Podcast

1. What actions did Mike Rinder take to silence the women coming forward in 2003/2004 claiming they’d been raped by Danny Masterson?

Mike has said after 13 years of being “out” that he was in charge of handling all “flaps” and “blows” and he reported what he had accomplished on these every day to David Miscavige for 22 years. Danny Masterson was a Scientologist on the hit TV comedy “That 70’s Show” in 2003/2004 and Mike Rinder was the Commanding Officer of the Officer of Special Affairs at this time.

This would be the “mother of all flaps”.

See how Rinder responds to this question when it was presented to him on Twitter. It was never mentioned on 3 seasons of Scientology and the Aftermath TV show. In fact, they continually described Rinder as the “former spokesman” during that show. Chrissie Bixler, when I contacted her in Season 3 of the show, never knew Mike Rinder was CO OSA when she came forward to report the alleged rapes – even though she had taped her interview with them 2 years before.

No way this is getting onto the podcast.

It’s the oddest thing, isn’t it? Here is Mike Rinder who ran the most criminal part of the Scientology, the Office of Special Affairs International for 22 years, and he’s never coughed up a crime.

How can that be?

Mike claims to have “gone to the FBI and told them everything” when he first got out 14 years ago. And yet nothing was ever done with the information he gave them. And Mike has never, in 14 years, discussed anything he supposedly told the FBI despite having 3 seasons of a TV show to do it, access to a blog every day for 14 years, and now a podcast.

Which leads us to the next question that will never be aired:

3. What was the name of the FBI agent you spoke to about all this criminal activity? What office did you meet at? In what city?

When these questions were asked of Mike Rinder many years ago by a woman who desperately needed to work with the FBI regarding the Church of Scientology, Mike told her “he couldn’t remember”.

How could you ever forget an interview with a federal agent where you could be charged with a felony and sent to prison for lying?

4. Why were 14 pieces of evidence wiped clean of blood and fingerprints at the crime scene where Kyle Brennan died?

Kyle Brennen died in February of 2007. John Sweeney’s book, the Church of Fear, proves that Mike Rinder was working every day with David Miscavige during that time, and for the months afterward when Rinder supposedly “blew” in June of 2007.

Talk about flaps – Kyle Brennan’s father, whose Clearwater condo Kyle’s body was found in, was David’s twin sister’s long time personal assistant at the time of Kyle’s death by a gunshot to the head.

Mike and Leah have never mentioned Kyle Brennan, although Victoria Britton, Kyle’s mother, has said she was interviewed for Scientology and the Aftermath.

You would think that, if Mike & Leah were the intrepid crime-fighting, tax exemption killing, critics of Scientology they pretend to be, the death of Kyle Brennan should have been Episode 1 of Season 1, right?

So it’s pretty clear that question will never be asked on Mike Rinder and Leah Remini’s Scientology Fair Game Podcast, or any where else they can keep it from being asked.

As with all the other questions above, and so many more.

At some point, are people ever going to realize that Mike Rinder is still running the same con he’s run for his whole career? I’ve been watching and asking these questions for the entire 14 years since Rinder has been “out”.