UPDATE: Apparently, there’s more trouble behind the scenes at Scientology and the Aftermath. After Mike Rinder’s announcement that Season 3 will begin on August 15th, he has now announced in a comment on his blog that Season 3 won’t start until the end of the year – November maybe.

UPDATE2: And now Leah and A&E have finally decided that November 27, 2018 will be the first episode of Leah Remini and the Aftermath, Season 3. 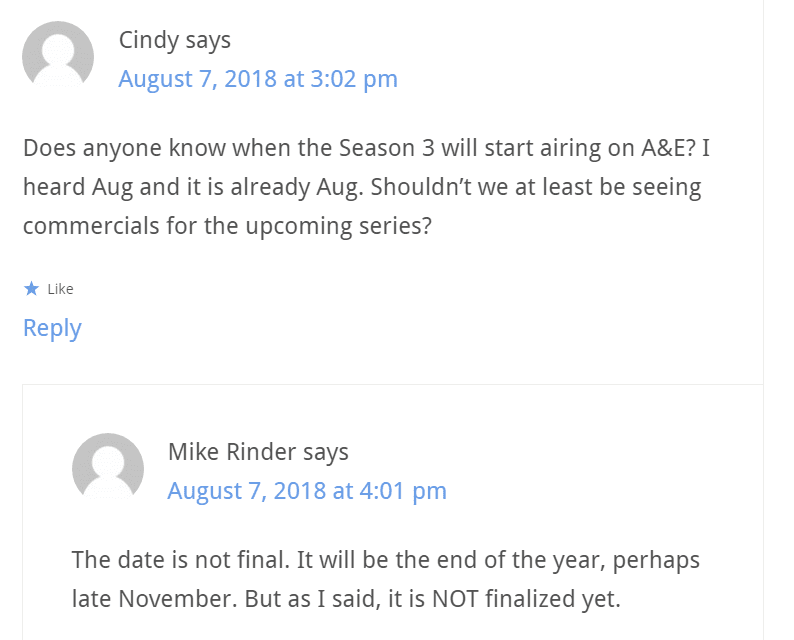 I can hear Leah throwing a screaming fit from her dressing room from here!

After 2 seasons of watching the former head of the Office of Special Affairs, and one of his assets, waffle around and emotionally manipulate people just like they did when they were in Scientology, you wake up and realize that no charges have been filed against any Scientologist for any criminal activity, and David Miscavige is still in power, abusing whoever he wants in Scientology – all still tax free.

There is a lot of tough talking on the show. And there has been some real heartbreaking stories of morally outrageous cruelty told on Scientology and the Aftermath, but nothing of any real substance. Much like Scientology itself, nothing has been shown that lived up to the promises that have been made.

The climax of Season 1, for instance, was visiting an attorney’s office in New York City to see what could be done about all the ‘criminality’ in Scientology. We were told to wait for the results of that meeting in Season 2.

I was excited – We were finally going to be able to do something about it!

But when Season 2 arrived, Remini called for a federal investigation in the Hollywood Reporter and knowingly, intentionally, lied – outrageously – that Scientologists believed in pedophilia. But as Season 2 wore on, no announcement appeared about anything having to do with what the attorneys told them. And no stories of any criminal acts were being reported, either.

And then, during Season 2 we got more tough talk about nullifying Scientology’s tax exemption and more tough sounding, but ultimately mealy-mouthed, insinuations of criminal activity, but no evidence whatsoever to bring about any kind of an investigation by law enforcement. And certainly nothing to repeal their tax exemption.

We saw lots of heart tugging and crying about all the cruelty in Scientology, and then 2 unexplained weeks of no new episodes – just complete holes in the schedule. Only to find out that they had an episode on Danny Masterson which they chickened out on at the last minute and never showed. 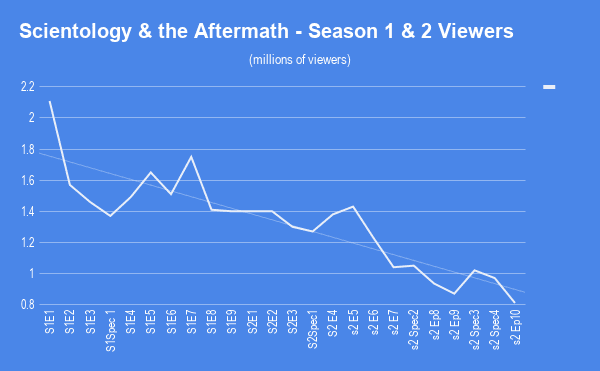 In the run up to Scientology and the Aftermath Season 3, attempting to be the tough talker once again, Remini says the focus of the series is “the shift to what will happen when the authorities become involved”. She urged congressman, senators, police officers, and the FBI to prepare themselves for what the pair says will be uncovered.

Did you hear that congressmen, senators, and police officers? Prepare yourselves!

Where have we heard that one before?

The Wind Has Gone Out of Leah Remini’s Sails

“People are starting to say we’re going say we’re to tell the story, and you can come after us and that’s OK ’cause we’re gonna tell the truth,” Remini said. “I applaud .. people who have told the story before us and who will tell the story after us, because it’s a collective.”
– Leah Remini, Deadline June 25, 2018

It’s strange, isn’t it? In Season 1, Leah Remini’s tough talking rhetoric was extremely powerful. Every time she opened her mouth it was clear and forceful and you completely understood where she was coming from and what she was saying.

But this quote reflects what I think Leah has learned as she has had more resources to dig and investigate and interview people on the subject of Scientology than any critic has ever had. And, as with most things involving Scientology – even Scientology criticism – when she scratched the surface, she found very little there there.

It appears that pretty much everything Scientology does is entirely legal, if not moral. And as we know, law enforcement can not act on immorality, nor should it. So Leah has had no choice but to leave us with a bunch of hot air and emotional manipulation, and this does not make good TV.

A&E obviously learned this the hard way. That’s why when they hit pay dirt on shocking viewers about ‘cults’, they dumped Leah with only 4 episodes in Season 3. And in what is obviously going to be Leah’s last season, they went with a more legitimate model, Elizabeth Vargas, an actual journalist who, hopefully, won’t talk tough without backing it up, and won’t chicken out when it comes to reporting the legal stuff.

Maybe it was too much to ask of Leah Remini, having spent 34 years in the church and being a new recruit to the anti-cult movement’s pseudo-scientific ideas. Maybe she was confused and weakened by having her whole life vilified by her new found anti-cult ideology after Scientology.

The anti-cult movement can be an incredibly confusing thing for a vulnerable Ex once they adopt the deceptive, over-simplistic, and self-defeating ideas of “cults” and “brainwashing”. They are made to redefine everything they ever experienced as a Scientologist, turning their spiritual pursuit from one of the most sacred and life-giving things they’d ever experienced into something profane and evil. That’ll fuck with anyone’s mind and weaken them, introvert them, and reduce them into something ineffectual and complaining like a spoiled teenager.

I hope that Leah wakes up from the anti-cult movement and starts to honestly and individually evaluate the 34 years of her life she spent in Scientology. Even though Scientology is ultimately nothing more than the kindergarten kitsch of religions, most Scientologists are sincere in their spiritual pursuit, and they generate a lot of valuable experience for themselves. But having a season to prepare which Leah has already started manipulating people again with all her tough talk, and with her reputation to uphold for being a big SJW ‘cult buster’ now, those aren’t ideas she’s likely to entertain anytime soon.

Someday, Leah might do a real series on what it’s like to participate in a minority religious and spiritual pursuit, and just treat it fairly, rather than splattering them and vilifying them so dumbly and unoriginally with anti-cult movement bilge.

Someday she might do that? I’ll be sure to prepare myself!

In the meantime, Alanzosblog will be watching Scientology and the Aftermath Season 3, and reporting on it here.

21 thoughts on “UPDATE: Leah Remini’s Scientology and the Aftermath Season 3 to Begin on November 27th”