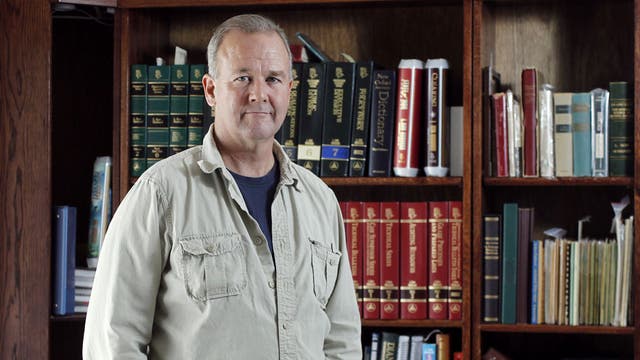 The sooner you take the blind spots off of your view of L Ron Hubbard and his spiritual deception called Scientology, the better off you are. It’s like removing a band aid, or getting your privates waxed – do it fast, scream loudly, and start running.

After reading Marty’s book this morning, I can see that you can’t even use this analogy to describe what Marty is doing. What Marty is doing is so painful that it requires a whole new metaphor: Marty is taking the longest, slow motion skid-across-the-pavement I have ever seen in the motorcycle wreck of leaving Scientology. And with his book, he’s trying to drag others along with him

Sitting here with a cup of coffee and my hair smashed to one side of my head, I went to Amazon.com and downloaded Mark Rathbun’s book “What’s Wrong With Scientology? Healing Through Understanding”.

I spent about an hour and a half reading through it, skipping the parts that are obviously meant to recruit people to the independent Scientology practice that he runs out of his home in South Texas. The parts of the book which I found most valuable were the last 20% of the book or so, from his chapter on the OT Levels to the end.

While reading Marty’s blog, I would often get the feeling that he avoided stating his own views on certain topics in order to leave them open-ended for his followers. I felt he was letting his followers fill in the blanks with their own views so as to keep them “participating” (in other words “stringing them along”). This is a technique that Hubbard taught in the “Art Series”, and when I talked to independent Scientologists, I could see it working on them too. Almost every independent Scientologist I talked to would believe that Marty was thinking the same thoughts they were thinking, feeling the same things they were feeling, had the same purpose they had, and was working for the same future they were working toward.

But this book has broken that spell. Marty puts out his own views here rather plainly, and very permanently. And so, very unlike his blog, you can clearly see Marty’s blindspots when it comes to L Ron Hubbard and to the subject of Scientology itself.

That Marty has huge blind spots regarding L Ron Hubbard and Scientology is understandable. When you have committed as many fanatical acts in your past as Marty, Mike and Dave have, like the East German Stasi dead-enders who are going to their graves declaring their loyalty to Communism, you just can’t face that it was all for nothing. In order to prop up your own mental stability, the last thing you can do is to admit to yourself and to others that there wasn’t a reason: You did those things simply because you were in love with your own self-delusions.

Maybe I should be less acerbic. Maybe I should not talk about my conclusions and string people along like Marty does. But I know different. I know that the long slow pull of the waxing compound across your gonads is needlessly torturous. I also know that there are many Scientologists who have not done harmful and fanatical things to people like Marty and Mike and Dave have, and they deserve the quicker action to get them up and running as soon as possible.

So I am going to write a series of posts just for those Scientologists who weren’t violent psychos in fake navy uniforms, beating people and bankrupting them while lying through their teeth. These posts will be prompting these Scientologists to ask themselves a series of questions about the issues raised in “What’s Wrong With Scientoliogy?” by Mark “Marty” Rathbun.

Sometimes, when the stakes are low, self-delusion can be worth it. But with billion year contracts, coerced abortions, bankruptcies, broken families, physical beatings, torture and false imprisonment, the cost of self-delusion on LRH and Scientology can be quite high. I think even a few thousand dollars is too much to pay for self-delusion, but many independent Scientologists disagree with me.

So here’s the first question to ask yourself about L Ron Hubbard and Scientology from Marty’s book:

Marty reveals in his book that L Ron Hubbard never came up with any OT Levels higher than OT 8. Then he said that Pat Broeker and David Miscavige lied about this to Scientologists, telling them that there were many OT levels above 8, and even selling them to people in advance.

Answers to think about:

HCOB 24 Jan 77 “Tech Correction Round-Up”
“OT VIII has been in existence all those several years, and to it has been added a very large number of OT grades. None of them have been issued. Notes for all these grades are in existence.”          LRH


LRH ED 301 Int’, 17 Dec 78 “Ron’s Journal 30, 1978—The Year of Lightning Fast New Tech”
“UPPER LEVELS.  There are other OT levels above VIII but these will be released from time to time when people are ready for them. We’re already higher than Man has ever been and it can get quite stratospheric.” LRH


Self-delusion, especially when it comes to Scientology, is not worth it. Don’t follow Marty and Mike and Dave any more.
Ask the hard questions.
Do it fast, scream loudly, and start running.