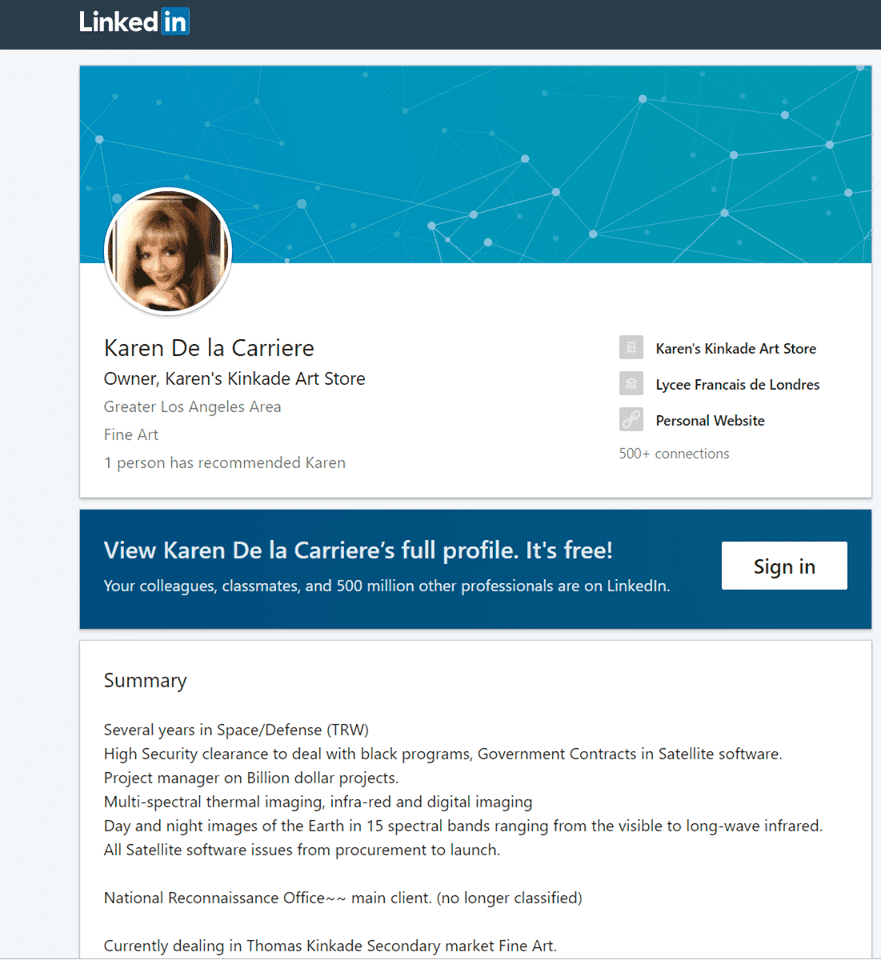 Lest you believe this page is faked, you should see that her LinkedIn page was independently verified as genuine on ESMB back in Sept of 2019.

Karen Accuses Me of Lying About This Conversation

Back in 2010, Karen de la Carriere began calling me to get me to stop criticizing Scientology and L Ron Hubbard. At that time, she was posing as an “Independent Scientologist”, claiming to have left the Church of Scientology, and was on the outside now trying to organize Scientology critics to focus on David Miscavige as the only thing wrong with Scientology – not Scientology and not the technology itself.

I refused, and went public to other critics of Scientology with what she was trying to get me to do. This let her know that I was not someone she was going to be able to control. She has been telling anyone who would listen to her that I am “insane”, and doing whatever she could to marginalize, discredit and shudder me into silence ever since.

At that time, in addition to telling me some of her exploits working for Mike Rinder at OSA Int, Karen told me that she used to work for the US Defense Department. She said her job there was to “socialize” with high security contractors who were working on top secret projects for the US government.

A couple of years ago, I wrote a blog post about this conversation, and Karen began posting that I was lying about it.

Since then, she has added the above items to her LinkedIn profile describing her career.

Do you see that reference to the National Reconnaissance Office?

Very few Americans, outside of the US intelligence community, have ever heard of it.

Here’s what Wikipedia says about the National Reconnaissance Office.

The Director of the NRO reports to both the Director of National Intelligence and the Secretary of Defense.[7] The NRO’s federal workforce is a hybrid organization consisting of some 3000 personnel including NRO cadre, Air Force, Army, CIA, NGA, NSA, and Navy personnel.[8] A 1996 bipartisan commission report described the NRO as having by far the largest budget of any intelligence agency, and “virtually no federal workforce”, accomplishing most of its work through “tens of thousands” of defense contractor personnel.[9]

I have previously written another blog post about what Karen might have meant by “socializing with contractors to find out whether they were leaking information”. But that’s just the entrance to the Rabbit Hole leading down to the bizarre and creepy presence that Karen de la Carriere, and her “husband” Jeffrey Augustine, embody in Scientology-watching.

I mean, this doesn’t make any sense – on any level.

But there it is.