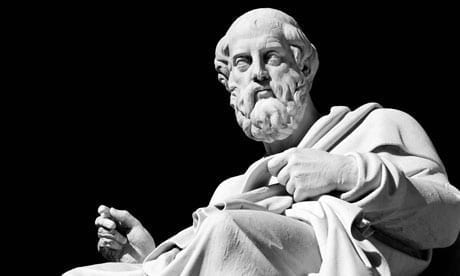 I told her that one of the things I’m struggling with most after leaving Scientology is that I am left with no religion – there is a big hole there where a religion used to be. She said that this was one of the most common things she heard from Exes as they were getting out: What am I supposed to believe now?

For the last 13 years, I have done a very severe and skeptical review of my own beliefs. And I have, for long periods, taken a totally material view of the world and my own place in life. I have looked from this viewpoint and said to myself – this is all there is. This material body is basically the same is that rock. My thinking is the result of chemical processes and little electrical sparks in my brain. When I die, that will be it. There is no more to human life than that.

This left me with a colossal sense of absurdity. If life is actually this way, then Life is completely absurd. There is absolutely no purpose to life than becoming fertilizer for the next generation. And so I would look at that absurdity and sit with it. I would embrace it. I would go to bed with it and wake up with it, and sit next to it during the day. I made Absurdity my constant little friend.

I would look back on the sense of spiritual certainty I had when I was a Scientologist. I would see that most of the things that I believed were actually outright lies – not just foolishness on my part. And then there were the conclusions I’d made out of nothing but emotional needs – without evaluation or critical examination at all. I believed it because it felt good to believe it. I’d sit and look at all the decisions I’d made in my life, catastrophic decisions, based purely on emotionalism, social coercion, misdirection, and lies.

I came to the conclusion for myself that there was a better way for me to live, and that was through constant examination and scrutiny, and the eternal willingness to change my mind when new information presented itself. To have the courage to cling to nothing.

And so now I believe that I have examined things pretty well from a material viewpoint. I have learned logic and critical thinking skills, studied all the great material skeptics from Epicurus to Dawkins, Hitchens and Harris, and practiced skepticism of my own existence from a nihilistic Buddhist, even.

I can say now that I have come to a conclusion about it for myself.

There are good and bad, right and wrong, true and false, constructive and destructive, practical and impractical, aspects to both spiritual and material viewpoints on life. I regularly talk to materialistic atheists who are as CERTAIN and as pinheaded as any fanatical Scientologist. I find the same smug ethnocentric superiority in both.

An atheist pretends to know what happens to him after death as much as any Scientologist.

For a human being to believe that they can perceive what is really going on around them in the universe, and the exact truth of their own existence in it, is, I guess, the logline for the human comedy. This belief that human beings are capable of grasping their own existence is not supported by any science, or philosophy. In fact, it is contradicted by the best of both.

So there’s a belief in a spiritual life, and a belief in a purely material one. There is no knowledge of either for a human being.

I have realized that for me to choose one, and to exclude the other, was my major mistake.

Because life is neither all spiritual, nor all material.

I took a trip back to the cornfields from Los Angeles when my mother died. I drove 2000 miles alone to her funeral. She traveled with me in my Jeep, while I was driving and crying, and talked to me, most of the way. She said things to me about my future that actually happened a few years later. She wanted to warn me ahead of time and see that I made it through the turmoil that was coming up in my life.

A material viewpoint would call this the magical thinking which comes from the chemicals which squirt in your brain as a result of grief, and it would not matter that the things she said to me happened, and were things that only she could have said to me, nor that they were things that I could never have predicted. But those things that were said to me on that trip had to come from her – they could not have come from me.

I’ve decided that absurdity has a place, but not everywhere.

There is no practical benefit to denying life its meaning.

I now believe that I have looked at things thoroughly enough to make a choice about them. And I have chosen that a person can have a spiritual outlook on life, and use logic and reason to temper it, and to keep it constructive.

Never again will I embrace any one guru and assign him infallibility, or ever accept anything without thoroughly testing it. Nor will I ever sign a 2.5, 5 or 1 billion year slave labor contract to promote a spiritual ideal that’s been implanted in my head.

But I will also not deny those things that are meaningful, and undeniable, to me.

I’ve learned a lot from Scientology – mostly what NOT to do when approaching a spiritual philosophy or practice.

But just because a fire has burned you, does not mean you should never cook again.

No matter how material you get – it’s still just a choice.

There are benefits to both a material skepticism and to finding spiritual meaning in life as a human being.

So I choose both.