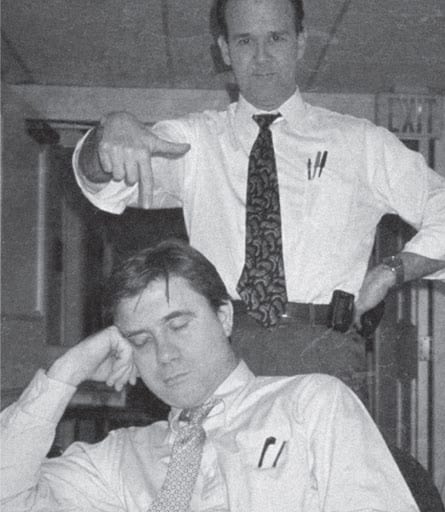 While Rinder was very forthcoming about his duties and responsibilites for the Church of Scientology in court documents in 2013, since then there has been a concerted effort to obfuscate the facts about where he was and what he did for David Miscavige as the Commanding Officer of the Office of Special Affairs for 22 years.

Tony Ortega in recent years has only described him as a “former spokesman” for the Church. But that is a knowing deception on Tony’s part, and it’s very weird. Tony seems to be relying on the fact that almost all his new readers who came in through Leah Remini’s Scientology and the Aftermath have no clue who any of these people are, nor any of their histories. And, ever since the beginning of that TV show, Leah and Mike and Tony have all been whitewashing Mike’s past.

It was only since the first episode of Leah Remini and Mike Rinder’s podcast called Scientology: Fair Game that they were forced to admit who Mike Rinder was.

But they have never admitted what he actually did.

There are still a few people around who know the truth. I was in Scientology from 1984 to 1999. Mike Rinder was definitely the Commanding Officer of the Office of Special Affairs druing that time. He ran the OSA that got me fired from my job, tried to destroy my family, and harassed my 83 year old father before he died.

So who these guys think they’re fooling is beyond me.

But there is one guy who can’t be fooled on any of this: Marty Rathbun.

Marty Rathbun, Mike Rinder and David Miscavige worked together every day on all matters of Scientology Fair Game and Black Ops, as detailed in Marty’s sworn affidavits.

In fact, from what I have experienced of him since 2009, Marty Rathbun is the only guy who has never lied or tried to hide about what he did in Scientology. And Marty has even confessed crimes he comitted in the Lisa McPherson case.

Mike has never, ever, done any of that – even though many people who he harmed have asked him to for over a decade.

So you can imagine how interested I became while reading Marty’s latest blog post from last night when he wrote:

“Mike Rinder, in spite of being called out on his lack of candor in disclosing a single particular about what he did with his own paws during his twenty-years as head of Scientology’s Office of Special Affairs, had no particulars to give once again. Instead, he waxed authoritatively about acts that I allegedly did during that period. Not surprisingly, he did not even get that right in spite of me having long ago cleared that record.”

Does this mean Marty is finally going to step in for Mike and spill the beans?

I sure hope so. I’ve been waiting 20 years for these answers.

ADDITION: As proof of Tony Ortega’s continued lying about what Mike Rinder did for Scientology, this is from his post this morning:

6 thoughts on “Will Marty Rathbun Finally Reveal What Mike Rinder Did As CO OSA?”