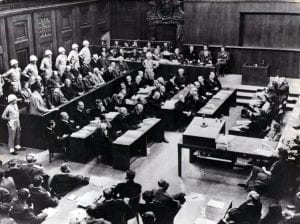 After WWII, a series of trials were held by the victors to prosecute war crimes by German soldiers. During these trials, over and over again, “I was only following orders” came up as a defense for these soldiers’ actions. This defense was roundly rejected by the prosecutors and the judges because:

“The fact that a person acted pursuant to the orders of his Government or of a superior does not relieve him from responsibility under international law, provided a moral choice was in fact possible to him.“

This defense was invoked so much, it has become known as the “Nuremberg Defense”.

The anti-cult movement provides the principle ideology almost all Ex-cult members are given to adopt after they leave their minority religions. The foundation of that anti-cult ideology is the belief in “brainwashing”.

Throughout Leah Remini’s Scientology and the Aftermath, the “I was brainwashed” defense comes up more often than in the Nuremburg trials by people who committed the worst abuses on others in Scientology. Over and over this concept is presented as a defense for these abusers on the show to explain why they did what they did to other people.

This “Brainwashing” idea is everywhere for Ex-members to adopt, and pushed on them from every angle on the Internet. And yet since the term was invented in the 1950’s, no study has ever been conducted on brainwashing that has found any evidence it exists. These studies prove that brainwashing is nothing more than a belief. But this belief persists. I think it is such a persistent belief because it is very a convenient way to explain things that you do not want to confront about yourself.

And yet, if you are going to ever “recover” from your “cult experience”, this “brainwashing defense” needs to be the first thing to go. The brainwashing defense acts like an opaque curtain between you and your past self – your former thinking, your former decision-making, and all the actions you took while you were a “cult member”.

This idea of brainwashing, and in fact all of the ideas that we have been given after Scientology from the anti-cult movement, need to be scrutinized and questioned just as hard as you questioned your former Scientology ideas. Because if you do not face facts, and the scientific evidence, you will continue to believe that you were not really you while you were in the “cult”, and this dissociation with yourself will continue and worsen long after leaving Scientology.

Just as you adopted the idea that you had a “reactive mind” which could only be erased using Scientology, you have also been given the idea that you must “recover” from the “harm” of your past minority religious pursuit. When an Ex drops the brainwashing defense, they will usually find that, in the overwhelming majority of cases, there is nothing to “recover” from in their past “cult’ experience.

You had a series of spiritual and religious experiences in a minority religious pursuit. You developed and adopted a view of the world that came from the teachings from that pursuit, and it worked for a while – until it didn’t.

That’s the story for the overwhelming number of Scientologists – at least 98% of them over the 67 years that Scientology has been around.

Some people did experience real trauma in Scientology. But you’ll find, once you drop the anti-cult movement’s hysterical co-dependency and mushy thinking, that those people are actually very few and far between. After you dump the anti-cult movement, what will then arise is the most important thing for you to examine: Your own willingness to lose yourself and your own thinking into group ideals and tribalism, and to become too willing to follow the orders of your group’s leaders out of your own selfless sense of loyalty.

Scientology staff membership is a ladder of weeding out those who will not comply with orders. Those who make it all the way to Int Base, the craziest and most abusive place in all of Scientology, got there primarily because they followed orders with no “backflash”.

If your brainwashing defense is keeping you from examining this very down to earth and real life practicality about yourself – you are headed for your next cult, where tribalism and partisan thinking blinds you to the consequences of your own decisions and your own actions, and primes you for another sociopathic set of behaviors.

You will never get your life back until you get your life back. You must drop all these justifications and rationalizations for what you did and what you decided, and all those beliefs you’ve picked up after Scientology that you were some other person than you are now. You are the same person now that you were when you were a Scientologist. You have just adopted a different worldview than you had earlier, a different set of filters with which to strain out the world.

As long as you believe that you were under “brainwashing” in Scientology – AND THAT YOU AREN’T NOW – you will never be able to recover your own agency and sense of self. You will never see the truth of who you are, and accept that, which leads to reaping the very rich rewards of all the experiences of your own life.

Jackson and Chris Shelton and Mike Rinder, and all other Int Base escapees, are not less ethical or less moral than anyone else. They have their own reasons for following the orders they followed to do the things they did. But they will never see what their own individual reasons were as long as they believe in the anti-cult movement’s ideology of “brainwashing”, and use it as a defense against their own self-inspection.

3 thoughts on “The Scientology Brainwashing Defense”