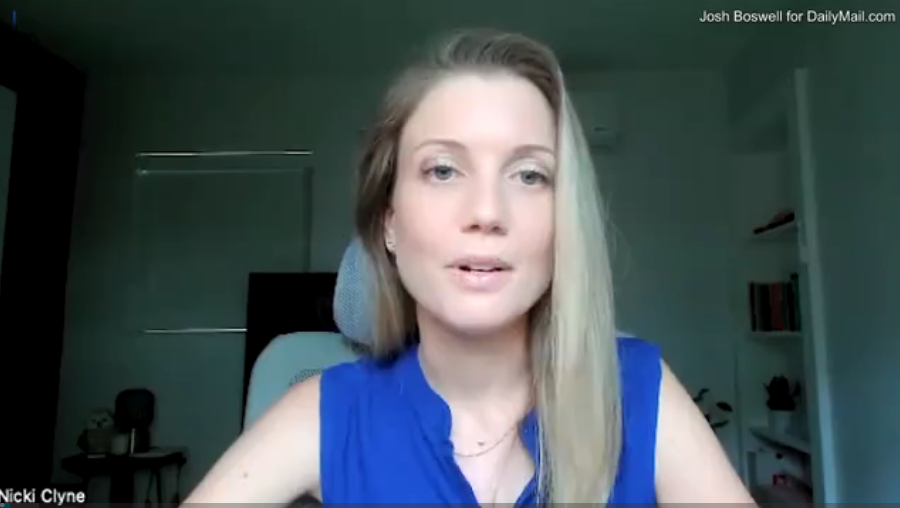 Watch the full interview below.

This interview is fron the Daily Mail Expose’ on FBI evidence tampering in the Keith Raniere Case:

“My name is Nicki Clyne and I started my career as an actor. Some people may know me from the TV show Battlestar Galactica.

I got involved with Executive Success Programs, which is the coaching program that most people conflate with Nxivm actually. There were a number of different companies and programs and people, you know, and then it’s all just called Nxiuvm. But that’s, that’s for another day perhaps.

I started taking classes with them in 2005 and just really loved the tools, the program, and became a coach and continued my involvement for about 15 years. Dating myself a little bit.

And I just, I loved it. I really found a lot of improvement in my own life internally as well as externally in my relationships and things like that. And I loved the community.

So it’s been quite a tragedy for me personally, to watch the community be destroyed in the way that it has through the media and through the court system.

I was pretty much at the center of it all, as as close as you can get to the center, while still being able to be here and speak to you and I’m very grateful for that.

I also see it as a huge responsibility to get the truth out and to expose the injustices that occurred in this case.

My understanding is that there are a number of what what I’ll call, I’m not again, I’m not an expert, but kind of circumstantial factors that are very suspicious, which on their own are obviously not dispositive. They just point to, you know, that maybe there’s something more going on here.

And then there are the technical findings, which have been confirmed by multiple experts, forensic experts, one of them 20 years in the FBI. Not only did he train the forensic FBI agents, he trained the trainer’s of them. So he’s extremely well versed not only in the digital and forensic aspects, but also in the FBI protocols around how you handle this type of evidence.

So it’s been a very steep learning curve for me, you know, first of all, just understanding how this whole process works. So someone being indicted and investigated and all of that it’s been quite an education. I mean, I’m grateful for it again, I think my mom would have rather that I went to law school instead, but I’ve learned a lot nonetheless.

And, and so it’s, it’s very evident, even for someone like me in learning what actually happened and in the case that things were not handled properly, the chain of custody was broken.

So, the evidence and this again, I think it’s important for people to understand this evidence, really, it was the only Digital hard evidence in the entire case. All the other charges rested on testimony and kind of the perception of intent. And and why things were being done. But this evidence is the only thing that you can’t argue.

Like there’s no different side to there being photos of an allegedly underage woman on an on a hard drive, which is what they use to convict Keith Ranierie of child pornography.

And so I think the importance of the evidence can’t be understated as well as the inflammatory nature of it. Because again, even though there was all this salaciousness in the media before this charge was brought forth, there was still room to really look at, okay, what happened here? And are these are these people’s story consistent with each other, and with reality, and with evidence and all of that once the so called child pornography, evidence came into play?

That’s when all the Co-defendants took plea deals. And that’s when really there was no defending key Raniere like, you just can’t possibly defend that, and I certainly would never defend that.

Well, when I heard about those allegations, I had already been introduced to this idea that the prosecution was dead set on winning at all costs. And the truth was less than secondary. And so I had friends who have gone in to take proffer sessions who were threatened and bullied for not agreeing with the prosecution’s narrative.

So I already didn’t feel trusting, I will say, of everything that they put forth. And I also had 15 years experience of, of knowing the man being accused of these things, and it didn’t. It didn’t add up. It didn’t make sense to me with everything that I knew about him at the same time. You know, I’m I’m a very rational human being. Obviously it made me question things. And so, I guess, in short, I really didn’t know what to think.

And there was part of me that that hoped that it wasn’t true. And I didn’t put it past the government to potentially put something forward that wasn’t true because I’d seen them do that. I’d seen them say things about my friends or about events that I was present for that weren’t true. At the same time, obviously, if it was true, that was problematic.

What I feel very grateful for in my own journey, although it was very difficult is that I committed myself to reserve making any major judgments or conclusions until further down the line when I could get more information.

And now we have that information.

And it makes a lot more sense to me now, although it’s very damning on the justice system, and for the FBI.

In this process, I’ve come to know many more people who’ve been through being prosecuted, especially through the federal system, people, some of them who are in prison, some you know, are out of prison now. And the most disappointing thing to me is that while our case is unique, in many ways, you know, like the story obviously, has a lot of unique elements. This process of injustice is not unique in this country.

And that’s why I feel particularly committed to exposing this and sending a message to prosecutors to two FBI agents to anyone in law enforcement really that this is not acceptable, and that we as citizens really need to take it seriously.

Even and especially when it’s someone who’s hated.

So it’s, um, I feel purposeful, even when it’s very difficult and it’s been, you know, I’ve had to learn to develop a thick skin which is not natural for me, but I do feel like it’s really important.

I think the the tampering is just the tip of the iceberg. I think when people start to really understand what was shown in court to justify the other charges, the whole thing will begin to unravel. And, you know, it’s difficult because these charges, these crimes, you know, the crimes of forced labor and sex trafficking, are very serious and very harmful, and people who commit these crimes should be held accountable.

But I believe in due process, I believe in meeting the actual evidence to support convicting someone of those crimes, not just hearsay, not bending things or, you know, prejudicing a jury so much towards the defendant that they don’t even really know what’s needed to to qualify as sex trafficking. They just know this is a bad person.

That’s what I believe happened in this case, and I would implore any journalists you know, such as yourself or anyone really wanting to understand the case better to look at what they use to justify those charges because, in my opinion, it’s very dangerous. The precedent set are very dangerous for what can be classified as a sex trafficking. And someone can be sent to prison for 40 years, based on one person’s testimony about one event that they consented to.

I mean, there there are a lot of things I would do differently. Knowing what I know now. I don’t know if I regret anything in the sense that, you know, I know I did the best I could and I did it all with the best of intentions. I didn’t fully understand how the world worked and how just how powerful certain people and tools can be if they’re set out to destroy something or someone. And I think I was very naive.

In a lot of ways, I think you know, I for all the things people say about like, what it’s like being in a ‘cult’ or even what Nxivm has been accused of, which I don’t I don’t consider it at all. They just know that that’s it. A criticism you know: I traveled all the time. I kept close relationships with friends all over the place, had much better relationships with my family.

So all of the things that people might, you know, think. I don’t know like they did because they were part of Nxivm like my experience was that the tools and the choices I made were all like I had a better toolset to be able to make decisions that were more in line with my values.

So in that sense I don’t really have regrets. I regret that this has caused caused so much damage. I think a lot of people have been hurt. And it’s really sad and tragic and painful because people that I thought were my friends for life, have taken a very different path and I may never speak to them again. And that pains me deeply. I don’t know what I personally could have done to avoid that. So that might take deeper reflection.

But I certainly regret that this happened at all in the way it did.

My hope with exposing this issue with the tampering and getting it into the public is that it can create enough attention that it puts pressure on the court to either make a ruling on it or investigate it or ideally both.

Because I think that one way that they could address it is by granting the appeal, you know, and then it all kind of just goes away.

But really we’d like to get to the bottom of this because whoever did this is either still working in the office and potentially doing criminal things to convict more people. So I think it should be investigated. I think that the you know, the public really deserves answers and I hope that enough people see this as problematic that they that they call for it and I think the media is a big part of that. And And ideally, the FBI or the DOJ, whoever chooses to respond publicly to this. has, I think a really wonderful opportunity to say we won’t stand for this and we are going to investigate and find out how this was allowed to happen and make sure it never happens again.

I don’t think he [Keith Raniere] is guilty of any of the crimes he was convicted of in court. I think he’s guilty of social crimes. I think that for the most part, people misunderstand who he is and how he’s chosen to live his life and why.

But even the ways in which he might lead what, what people might call an alternative lifestyle – it’s not illegal.”