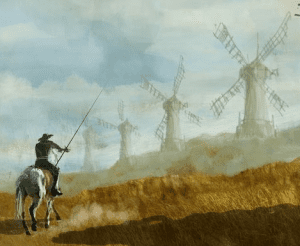 I’ve been debating the marauding Internet anti-Scientologists over the last few days, and it’s been a lot of fun.

I used to be a marauding Internet Anti-Scientologist myself. Back in my day though, there weren’t as many of us. All the recent media on Scientology has really swelled their ranks. And they are more cock-sure of themselves than I have ever seen them.

It kinda sucks that I’m no longer part of that tribe because, as an Anti-Scientologist, this was the future that I always dreamed of: legions of us descending on anyone who says they are a Scientologist and ripping them to shreds. Splattering them with all kinds of nasty information exposing L Ron Hubbard’s and David Miscavige’s utter depravity. And generally browbeating a Scientologist into seeing how “wrong” he is to be one.

So I’m really missing out on a present that I helped to create in the past.

Story of my life, I guess.

What have I been doing instead?

Something much more productive, and much more aligned with my own purposes: I’ve been practicing Basic Skepticism on Scientologists & Anti-Scientologists.

Here’s how it works:

Step 1 is very important. Sometimes people make claims and you don’t recognize that a claim is being made. This can lead you to accepting the claim without really noticing it. So here are some examples of claims that Anti-Scientologists routinely make about Scientology:

If you go back in time on my own blog here, you will find me asserting almost every one of those claims. The recent shift in my perspective over the last couple of years has come as a result of my learning and applying basic skepticism to my own beliefs.

Once you recognize that a claim is being made – whether you agree with it or not – apply Step 2: Asking for, or looking for, positive evidence in support of that claim.

As an example, let’s take the first claim above:

The Training Routines (TRs) in Scientology produce a hypnotic trance in people who practice them.

When you apply step 2 to the claim, you will only be looking for evidence that positively supports that claim. You will not be looking for a negation of the claim, such as “No it doesn’t! I applied TRs and I felt quite refreshed afterward!” That’s simply a counter claim, and pursuing that ignores the evidence in support of the original.

So ignore counter claims and focus directly on the claim. You want to see positive evidence in support of that claim which demonstrates “The TRs produce a hypnotic trance.”

Are you starting to get the picture here?

But to prove that a claim is true with positive evidence that supports it?

That’s very different. And quite a bit more difficult. And messy.

During the process of Step 2, your thinking changes. You get uncomfortable. And you realize the difficulty of the claim, and that its related issues aren’t so simple at all. You begin to see the problems associated with the claim and the oversimplifications people use to keep believing them.

Your feeling of certainty begins to wane. You realize how much you actually don’t know. And you grow up a little. The boiling temperature of your blood recedes, and you start to feel more peaceful.

So shouldn’t you apply a little Basic Skepticism to the claims of Anti-Scientology before you work yourself into an hysterical lather and launch marauding campaigns all over the Internet, shoving your beliefs down everyone’s throats?

Obviously, because I myself have engaged in such behavior in the past as an Anti-Scientologist, I didn’t used to think so.

But I’ve learned. And now I think it’s important to apply Basic Skepticism to the claims of Anti-Scientology, and to Scientology.

So I am passing this simple but completely subversive critical thinking skill over to my friends in the Anti-Scientology and Scientology Tribes.

Do you think they’ll use it?

47 thoughts on “Basic Skepticism for Anti-Scientologists”