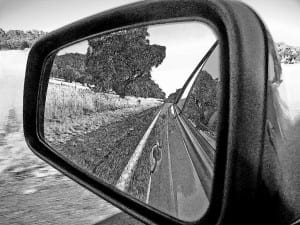 “I joined Scientology to help create a world without war, insanity and crime. I used to believed it was possible and others believed it too. But now? War is still with us – crime is on the rise and I don’t know if Scientology is now certifiably insane yet but it is certainly “crazy”. I now think that the world would be better off without Scientology. So I spent 35 years wasting my time.”

I understand this reasoning. It was my own for many years after getting out of Scientology.

But I have come to see the flaws in it.

There are actually several.

As a Scientologist, you were not even allowed to know where Int Base was located.

In order to accurately weigh the gains and the losses of spending so much time in Scientology, you have to factor in the onslaught of lying and deception that you were being subjected to as a Scientologist. And then you have to do something that Scientologists are taught NEVER to do: You have to realize that you are not responsible for being lied to.

The people who lied are responsible for lying to you.

The people who were lied to are not responsible for being lied to.

But there is no shame in being actively lied to.

Stephen Hassan, in his work with former cult members of every kind, points out how often it occurs that the people who are followers of the cult leader are more intelligent, more sane, and much more spiritually insightful than the cult leader himself.

Often, the cult member, because they are so sincere and focused on their own spiritual advancement using the leader’s beliefs and practices, produce extremely valid “wins” that the cult leader never even thought could happen.

We know now that this happened routinely around L Ron Hubbard. The development of the technology of Scientology which occurred at Saint Hill in the 60’s was a kind of Thomas Edison light bulb factory where Edison himself is not the guy to have invented the lightbulb – one of the engineers that worked for him did. Edison just took the credit for it and no one ever found out about the real inventor until much later.

For more on this, read the experiences of someone who was there:

L Ron Hubbard routinely took the “tech” developed by SHSBC students and others and claimed it for himself. And then declared or discredited the real authors of the tech because he was afraid their influence among Scientologists would surpass his own.

Again, this is something that you could not have been aware of because you were being actively lied to about it.

What you did with the information once you found out about it is the point at which you were responsible, and not before.

The human mind has certain biases which routinely, and falsely, color the perceptions of people called cognitive biases. One of the most important for a former cult member to know about is called the “hindsight bias”, or the “I knew it all along” effect.

The Hindsight Bias occurs when:

“… people feel that they “knew it all along,” that is, when they believe that an event is more predictable after it becomes known than it was before it became known. Hindsight bias embodies any combination of three aspects: memory distortion, beliefs about events’ objective likelihoods, or subjective beliefs about one’s own prediction abilities.”

Hindsight bias is the central plague of the Ex-Scientologist.

Your mind has a tendency to take the information that you know now and mix it with your past – when you didn’t know it yet.

So you now look at yourself as a stupid idiot for what you did back then – based solely on what you know now but which you did not know then.

When I look at who I was back when I was first getting in, getting involved in Scientology was absolutely the right move for me. I did not know about the beatings, or the RPF, or Xenu, or even the real world consequences of the Sea org or disconnection. None of that was going on around me in Peoria, IL where I first got involved. It was all very good, actually.

I knew the ARC triangle, granting beingness, the tone scale, auditing, how Scientology got me off of drugs, and gave me more discipline and hope for my own future than I ever had before.

Because it’s been reported in the news so much, people generally now know all about Xenu and all of the weirdest and most abusive stuff from Scientology. That was never the Scientology I joined, or belonged to for so many years. People generally still know very little about the good that it did for most people when they were first getting involved.

You were your own person getting yourself into Scientology. You were curious and courageous and rebellious and interested in new ways of looking at things.

You probably still are.

So screw em. Be yourself. And take heart that you are not a cookie cutter dishrag like too many others – and you now have the scars to prove it!

Your experiences are valuable. Don’t devalue them for no good reason.

And don’t get down on yourself for having been a Scientologist.

After all, you left when you found out that it was not what you were told. The same ideals that got you in, got you out, too, didn’t they?

You stayed true to your own ideals.

Isn’t that what you’ve always asked of yourself?

So go back to BEFORE you knew what you know now and look at the environment you were in back then and the information and the resources that you had at your disposal then to learn the truth about Scientology. And don’t forget to factor in the huge onslaught of social coercion you were under as a Scientologist.

Also, don’t forget to factor in where Scientology was actually helping you to overcome real problems in your life.

There are many reasons that you could not know what you know now about Scientology.

So, Peter, whoever you are, I question your rationale, and your conclusion, that “I spent 35 years wasting my time in Scientology.”

I think that when you look at things from the perspective above, you will come to another rationale, and to another conclusion.