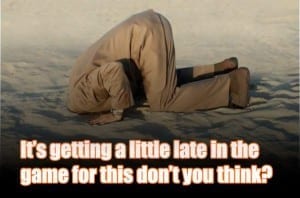 L Ron Hubbard wrote some very abusive technology meant to do others harm. He even taught Scientologists to never fear to hurt others in a “just cause”.

If you can not allow yourself to see the harm that LRH put into Scientology, as an independent Scientologist you will follow LRH’s tech blindly, cause harm with it as LRH said to do, and then keep on harming with it because that is what LRH said to do. In other words, if you can’t spot where LRH was just dead wrong, or plain evil, you will do whatever he says.

You will just dramatize Scientology on people.

This is actually very important to be aware of if Independent Scientology is going to be a less abusive form of Scientology than David Miscavige’s version.

In order to see the good in the tech, and to always do good with it, you have to be able to see the bad in it, too.

David Miscavige placed plenty of prompts into Scientology to harm others, too, but the DM Haters are not likely to dramatize those. Their blindspots on LRH will make them dramatize Scientology and harm others the 100% standard LRH way.