I told him that I got into Scientology and did everything I could to be a good group member, and then I saw things that I could no longer look away from and began speaking out and criticizing them. This led to my leaving the group, criticizing them on the Internet, and then their attempts at discrediting and fair-gaming me.

Then I became a member of Ex-Scientologists, and I did everything there that I could to support others who had been harmed by Scientology and were working to expose its abusive practices. But then I saw things with this group of Ex-Scientologists that I could no longer look away from and began criticizing those things, too. This led to my banishment from the group, and their attempts to silence and discredit me.

“So’, I asked, “rather than going into some kind of an infinite loop here, with your understanding of psychology, what is my next step?”

“It’s a process of human development that, for instance, a child goes through growing up in his family and then discovering more and more about himself as a separate and unique individual. It is a natural process of human learning and growth.”

I could not believe it. The only time I’d ever heard this term was when L Ron Hubbard defined it in Scientology as:

Individuation: a withdrawal out of groups and into only self. The mechanics of individuation are first, communication into, and then, refusal to communicate into.

The trouble with O.T.s in the past has only been lack of cooperation and a commonly agreed upon objective. Without these O.T.s eventually fall prey again to smaller beings with bigger organization skill, O.T. is an unstable state only when O.T.s are not cooperating with O.T.s but each one going his own way in the strong but fatuous belief he can single-handedly survive. The proof is, O.T.s have not survived as O.T.s whenever this super individuation collided with the super organization of weaker beings.

We were taught this term on staff, and were told by Hubbard that this was one of the most damaging things that could happen – Individuation.

When seen through the lense of cults and leaving them, I learned that individuation was actually becoming less of a cult member, and more of a unique individual.

Over on the Rachel Bernstein Marketing Channel, Chris Shelton asked her, during one of her many infomercials there, what the goal of therapy was. She gave a great answer. She said, “the goal of therapy is very similar to the goal of good parenting. You work until the person no longer needs you any more.”

I would only ask her why, then, does she work so hard to get an Ex to delete himself from any responsibility for his own life and decision-making as a cult member?

I think it is completely typical of Hubbard to re-define a fundamental term from psychology about a very important and valuable process, and turn it into a disease to be “handled” and stamped out.

The question for Ex-Scientologists is:

What if being a Scientologist was never a really a disease in the first place that you needed to “recover from”?

What if it was just one part of your own much longer spiritual journey that taught you many important lessons, and from which you emerged stronger and wiser than ever?

How would you know?

What if all this diseasification and catastrophizing of having been a Scientologist is actually a colossal disservice to the overwhelming majority of Exes who were not really harmed by their experiences, but who just graduated from Scientology, like one would graduate from kindergarten?

Some people were harmed, and do need to “recover” from Scientology.

But the overwhelming majority of Exes do not.

Studies of Ex-Cult members bear this out. From the wikipedia article on Apostasy, comes this gem of a datum to think with:

Sociologists Bromley and Hadden note a lack of empirical support for claimed consequences of having been a member of a “cult” or “sect”, and substantial empirical evidence against it. These include the fact that the overwhelming proportion of people who get involved in NRMs leave, most short of two years; the overwhelming proportion of people who leave do so of their own volition; and that two-thirds (67%) felt “wiser for the experience”.

This is taken from Victor Daniels’ lecture on Carl Jung from the Sonoma State Psychology Department website: 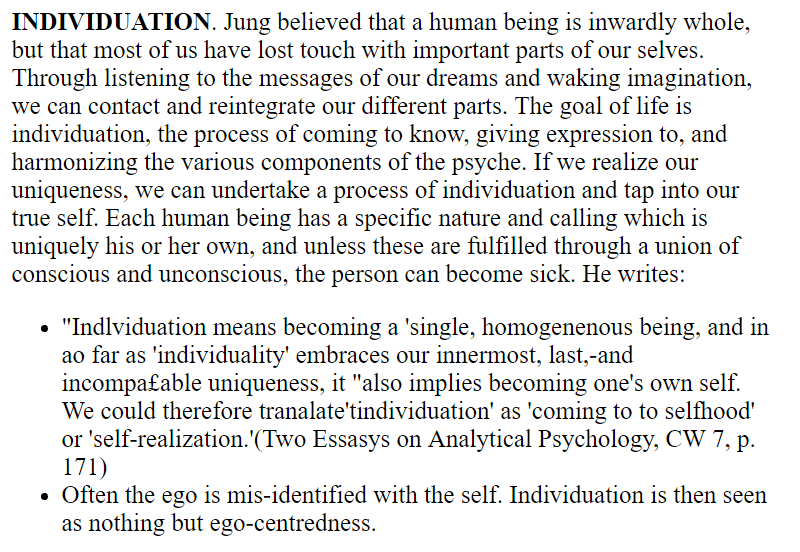 2 thoughts on “How Hubbard Lied: ReDefining “Individuation” Like It’s A Bad Thing”