I recently pissed off a Fierce Anti-Scientology Internet Warrior Princess about her use of cruelty. I asked her a lot of questions to try to understand exactly how she thought about it.

From what I could gather, I found that our motivations to be cruel to others on the Internet were very similar. I found that, for her, it was a matter of fighting for what’s right in the defense of not only one’s self, but for protecting her friends, too.

She made it clear to me that a good cruel, offense always beats a kind defense.

Then she proved to everyone that there is strength in cruelty, and only weakness in being kind.

I’m a real sarcastic guy. I can get sneeringly ironic and deliver multi-layered put-downs like almost no one else I know. It was “Schoolyard 101” when I learned how to do it. And I have been very effective at it all my life.

I’m good at twisting and mischaracterizing peoples’ intentions and what they say so that they look completely ridiculous. I know how to throw things right back into people’s faces. I can add in humiliating things that people never said, too, and make them look like fools.

I can thoroughly shame and embarrass people.

I didn’t use any of my Cruelty-Fu on the Fierce Anti-Scientologist Internet Warrior Princess. I tried to be kind in response to everything she threw at me. I tried to stay on the topic and not attack her personally. I tried to remain calm and repeat my point in response to my words and intentions being twisted and mischaracterized. She called me every insulting thing she could think of. And I tried my best not to do it back.

Cyber-bullying and cruelty are everywhere on the Internet. It is one of its dominant cultural norms.

But for some reason now I think it’s better to try to be kind.

I know what you’re thinking. You’re thinking that it’s like that time late in The Sopranos, after Tony had been shot and was lying half dead in a hospital bed dreaming a bardo-dream that he was Ken Finity. He was stuck in an airport hotel because he’d lost his wallet and couldn’t leave, but he couldn’t stay either because people would find out. And there were Tibetan lamas and that weirdly vicious, circular light that kept going around and around in the world outside his window.

They spent 3 full episodes on this before Tony finally woke up and went home. All he wanted now was to love people. After he got shot and lived, Tony Soprano just wanted to love his son and his family and all of his enemies in the mafia. He wanted to make peace with them and try to be kind.

And you screamed at the TV

NO! TONY!! YOU’RE IN THE FUCKING MAFIA DUDE! THEY ARE GOING TO FUCKING KILL YOU!!!

I know. I’ve tried this kindness thing before, numerous times. And I have to admit, I do not have a good track record of success with it. When a cruel guy like me tries to be kind I just look weird and creepy. I actually have no evidence that kindness will work on the Post-Scientology Internet at all.

I just know that I, personally, can not live without it any more.

So, like any pathetic, pansy-fied, weak-kneed, pussy boy, I’m going open my heart like a slobbering and retarded 5 year old, and place the favorite part of my favorite poem here for the Fierce Anti-Scientologist Internet Warrior:

With purpose.    Wild hope can always spring
From tended strength.    Everything is in that.
That and nothing but kindness.    More kindness, dear Lord
Of the renewing green.    That is where it all has to start:
With the simplest things. More kindness will do nothing less
Than save every sleeping one
And night-walking one
Of us.
My life belongs to the world.
I will do what I can.

– James Dickey “The Strength of Fields”

And say, once again, to her: You can fight the good fight, and expose every con man and exploitative Scientologist and Ex-Scientologist, without being cruel. 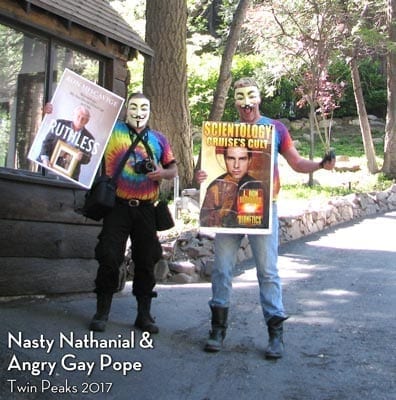