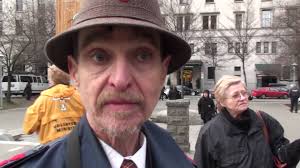 As I’ve mentioned, the history of Scientology criticism dates back to 1950, when a prominent dianeticist, a medical doctor by the name of Joseph Winter, wrote a book about what he experienced using Dianetics.

This was the first intellectual challenge to L Ron Hubbard’s fledgling “mental health” movement and Hubbard’s approach to handling criticism from others. Hubbard’s own real intentions regarding the work he was presenting to others are revealed in the many solutions he developed to silence his critics and the criticism of his writings over the years.

In the modern era of the always-entertaining activity of criticizing Scientology, the decisions and activities of one man – Gerry Armstrong  – would have to be considered epochal.

A lot has been said about Gerry Armstrong, but when you know the simple story of what this man decided, and how he acted upon those decisions, it is clear that much of what has been said – especially by the executives of the Church of Scientology – has been wrong.

The Simple Story of Gerry Armstrong in Scientology

L Ron Hubbard hired a writer to write his biography. Gerry Armstrong, a dedicated Sea Org member at the time, was assigned to be the biographer’s assistant.

While Gerry did his work, he came across factual information in Hubbard’s own writings which proved much of what the Church had published about Hubbard’s life, and what L Ron Hubbard had been saying about himself personally, as lies.

Confronted with this crisis of personal faith, and realizing the scope of fraud that had been perpetrated on the public, Gerry Armstrong was given a huge problem.

Armstrong had read the policies of Fair Game that Hubbard had developed for how to handle those who were declared “Suppressive Persons”, and he knew what Hubbard’s tech and policies were for Scientologists in handling such people. But surely, using the ethics system that Hubbard created to be applied on Scientologists, he had uncovered a major “out-ethics situation” at the very top of the organization, which, if it was cleared up, might result in the greatest expansion of Scientology ever.

So Gerry went to the group of “Young Turks” who had taken over Scientology from L Ron Hubbard in the early 1980’s, and who had been keeping Hubbard in hiding while the FBI was investigating him, and who also, as it turns out, had been keeping the stream of lies going about his life. These people included David Miscavige, Marty Rathbun, Mike Rinder and others. Gerry told them, basically, that “we need to stop lying about Hubbard and start telling the truth about him”.

Looking back, this was at once an extremely courageous, and naive, act. It was like a sheep walking into a den of wolves and telling them that they needed stop attacking his family.

Per standard Scientology policies, Armstrong was immediately attacked by the “Young Turks”. Having provided for such a situation, Armstrong was able to escape Scientology with much of the factual information about L Ron Hubbard as he could gather, and began telling the world about what he had found, and proving it with iron-clad documentation.

There is probably no one on Earth more Fair-Gamed than Gerry Armstrong. He has been “tricked, lied to” and attempted to be “destroyed” more than anyone besides, maybe, Paulette Cooper. The attempts to malign Armstrong’s character over the decades have been ceaseless. To this day, even Marty Rathbun, who apparently ran most of the Fair Game activities against Gerry Armstrong while he was an executive in the Church, calls him a “punk” on his blog and refuses to apologize to him for what he has done to Gerry.

To find out who Gerry Armstrong actually is, you have to look at his decisions and actions. For the situation in which he found himself, everything presented to him was a downside. He knew what happened to anyone who revealed the truth about Hubbard and Scientology, and he knew what they would try to do to him if he did. But did he remain silent and not tell the world what he knew about Hubbard’s life, and let them continue lying to people?

No, his duty to his society and to his fellow citizens was more important to him than his own self-interests. Getting the truth out about L Ron Hubbard, in L Ron Hubbard’s own words, allowed people to make informed decisions about their own involvement in Scientology. When everything was all downside for himself personally, Gerry Armstrong chose to do the right things for spiritual seekers who had the bad luck and the unfortunate convergence of circumstances to wander into the clutches of Hubbard’s “Church”.

All Scientologists owe Gerry Armstrong a debt of gratitude, although they may not yet fully realize it. For if it were not for the courage and personal sacrifice of Gerry Armstrong, we may have never known the full truth about L Ron Hubbard, his life, and the true activities of the Church of Scientology.

In my opinion, Gerry Armstrong is a hero. He is a man who, when all vectors of his life were pointed against him, chose to do what was right for the vulnerabilities of spiritual seekers everywhere, no matter the cost to himself personally. If there is a ledger in Plato’s heaven, where a toll is kept between one’s fate and free will, Gerry Armstrong deserves a +1.

For more information on Gerry Armstrong, you can visit him at his website: SuppressivePerson.org.