When I got out of Scientology and began exposing them on the Internet 19 years ago, it was because I had discovered how cruel that the leadership in the Church of Scientology had been to too many people. And I realized this had to be stopped.

And so, along with many others, at great risk to ourselves, we posted information on the Internet to ensure that their cruelty and their abuse would be exposed. I was fired from my job, had private investigators follow me and my family was threatened. All that is easily proven. A lot more happened that I can not prove came from Scientology.

At that time, in the late 1990’s and early 2000s, Marty Rathbun, Mike Rinder and David Miscavige, at the very top of Scientology, had been able to shudder most media companies into silence. During this period, Scientology was pretty much operating at their cruelest, and with impunity.

Even typing the word “Scientology” on the Internet got you fair gamed, let alone posting their confidential OT levels, and secret LRH orders to commit criminal acts.

As you know, there is very little honor among thieves, nor bloodless backsides among backstabbers. And so there was a great falling out between Marty, Mike and Dave. Marty Rathbun and Mike Rinder, along with many other cruel Int Base Escapees, ended up out here on the wilds of the Internet and told – a few – salacious stories about the mutual cruelties and atrocities that they caused to themselves and to too many others while in positions of authority in the church of scientology.

This has been great to watch. There really can’t be a better outcome than to see these cultic abusers rip each other apart publicly as is happening now on the Internet, in the press, in the movies, and on TV.

But here’s the consequence: The major spectacle that they are all causing is bringing in all kinds of eyeballs. And the swarm of people who are gathering to engage in Scientology-watching is getting huge, and likely to get even more so.

It’s the dream we all hoped for.

But be careful what you hope for. This is coming with a cost. It’s a cost that deletes the very reason I became a critic in the first place: Anti-Scientology is becoming just as cruel as Scientology was. 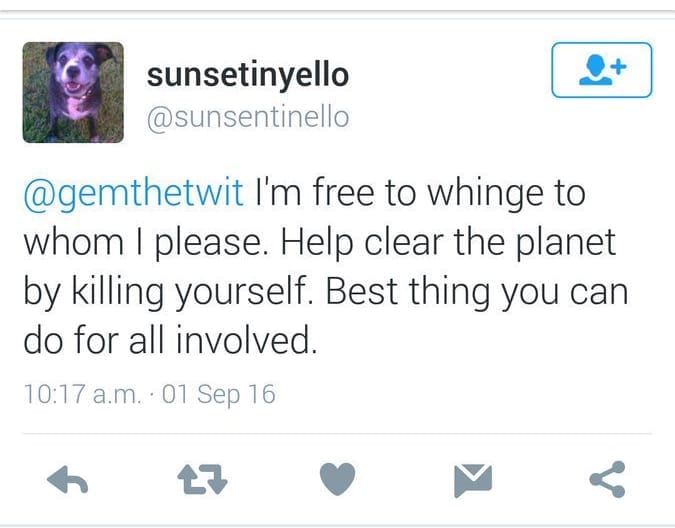 This kind of behavior brings about the exact same reaction I had when I first learned about Scientology’s cruelty to people and left them to expose them on the Internet:

THIS IS NOT WHAT I SIGNED UP FOR. THIS IS NOT THE GROUP I JOINED. I WANT NOTHING MORE TO DO WITH THIS. THIS IS THE KIND OF CRUELTY THAT MUST BE EXPOSED AND CONDEMNED.

This tweet was sent from some Twitter entity named sunsetinyellow to GEMTHEWIT, who is a public Scientologist in England who is prominent on the Scientology Twitter, doing her best to try to defend her chosen religion against people she sees as engaging in religious persecution.

I’m having a hard time not seeing it her way with tweets like this.

When I commented that this tweet was the kind of cruelty that not one Ex-Scientologist I know ever wanted to have happen when we first started exposing them on the Internet so long ago, another anti-Scientology entity named “DICE” – who is a long time supporter of Tony Ortega’s Underground Bunker – tweeted this to me in response: 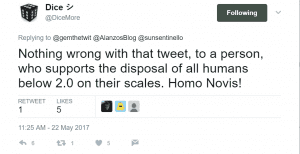 I feel just as betrayed and outraged now by this kind of cruel behavior from members of a group I thought I had belonged to as I did when I was a Scientologist and finally saw what they were doing back then.

This isn’t a better alternative to Scientology. We might as well all be Scientologists now, working to enforce the Tone Scale laws in courts on people below 2.0, or teaching LRH Fair Game techniques in public schools. That cruel society from Scientology would be no worse than this one – if this is how anti-Scientology is going to behave.

How many underground bunkerites will publicly condemn this tweet?

55 thoughts on “When Anti-Scientology Turns into Cruelty Against Scientologists”