Here’s what Tony wrote as the 2nd item on his blog today:

On Friday, The Hollywood Reporter published a statement by director Paul Haggis’s attorney, Christine Lepera, who said about sexual misconduct claims against him that Haggis “questions whether Scientology has any role here, which he notes has been attacking him for years with false accusations.”

We’ve heard from a lot of readers who wonder the same thing. Last month, Haggis sued a woman named Haleigh Breest claiming that she was trying to extort him for $9 million. Breest filed her own lawsuit the same day, claiming that she had been raped by Paul Haggis in 2013. In his suit, Haggis said that he had back surgery shortly before the alleged event and was incapable of doing what Breest accused him of. This week the AP reported that three additional women had come forward with their own allegations of sexual misconduct between 1996 and 2015 after seeing the news of Breest’s claims. Breest added their claims to her lawsuit in an amended complaint.

Breest’s attorney denied to Page Six that Scientology is involved in the claims against Haggis.

Until we see any evidence to the contrary, we’re going to reserve judgment. We simply hope that justice is served as this situation develops.

I bolded that second-to-last sentence of Tony Ortega’s post to show that he seems here to be saying that until he finds evidence to the contrary that Scientology is behind these rape accusations, he’s going to reserve judgement.

So Tony is assuming that Scientology is behind Paul Haggis’s rape accusations.

That is a clear bias.

If you go back and look at Tony Ortega’s reporting on Danny Masterson, he provides detailed accounts of his’ accusers’ accusations. Each of the accusations against Danny Masterson is described by Tony in gruesome detail.

I don’t remember Tony Ortega ever presenting any of Danny Masterson’s defenses, do you? If he did, he certainly didn’t emphasize them as much as the rape accusations against him.

This is another demonstration of the clear bias that Tony Ortega has for anti-Scientologists over Scientologists.

Tony even shows bias in favor of Paul Haggis’s lawsuit against his accuser’s, which, because they were filed on the same day, suggests weeks of preparation by his accuser with her lawyers. This pretty much rules out Haggis’s claims of blackmail. Why would someone who was blackmailing someone be working with her lawyers to sue him, too?

Because of Tony’s biased blindness, this goes straight over his head. And if his past reporting is a guide, Tony Ortega will never report any skepticism of Paul Haggis’ claims – only his defense.

That so many other journalists seem to consider Ortega an unbiased source on Scientology shows the degree to which they are letting their own bias’ against Scientology rule their reporting.

Take Yashar Ali for example, one of Tony Ortega’s anti-Scientology acolytes. He also laid the accusations on thick against Danny Masterson with little mention of his defense.

Yashar revealed yesterday what he thinks of ALL SCIENTOLOGISTS in this tweet to Kirstie Alley: 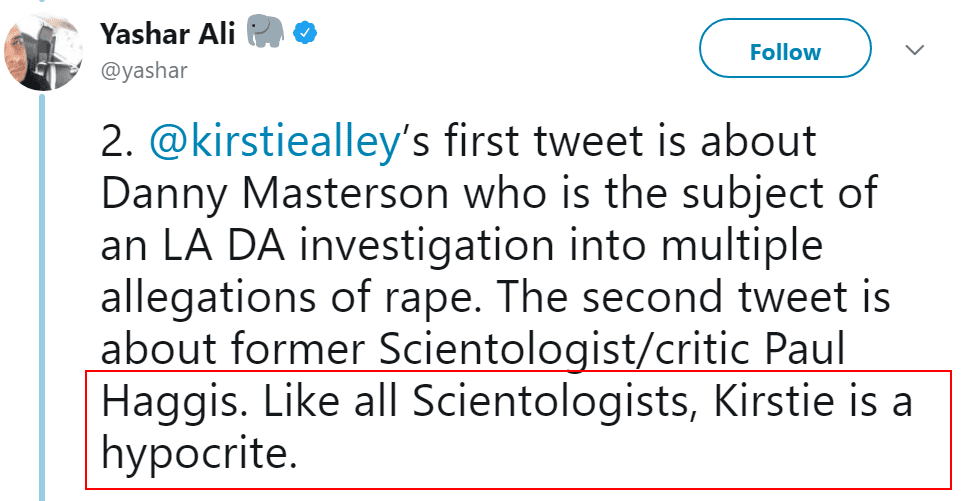 When Yashar was asked about his statement about Kirstie Alley and all scientologists being hypocrites, he doubled down on it:

So this is what’s passing for reporting from Anti-Scientology “journalists” now. No claim is being made here by me about the validity of the accusations against Paul Haggis, or Danny Masterson. I am focusing solely on Tony Ortega’s and his never-in anti-Scientology acolyte’s reporting of them.

I’m claiming that their reporting is biased.

Does anyone even care? Or is it just too fun to go after Scientologists right now?

See, I think a journalist has a duty to remain objective, especially on matters as volatile as sexual assault and religious beliefs. What we need is unbiased reporting by non-ideologues, not biased reporting by anti-Scientology ideologues. Because of the volatility and importance of this news to so many peoples’ lives, biased journalists are last thing we need.

But that’s what we have right now, and too few people are noticing that.

With Tony and Yashar, are we seeing the next Butch and Sundance of biased anti-Scientology journalism here?

There’s a lot more to say, but these events are developing rapidly and my mouth is stuffed with popcorn right now.