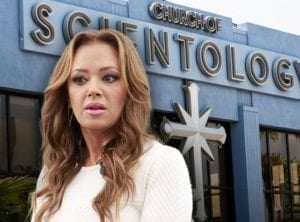 There’s nothing like finally getting what you’ve wished for.

But for anti-Scientologists, that was just foreplay. Now the rest of the spooge dream has to fully consummate: FBI raids, Perp walks featuring David Miscavige in hand-cuffs, televised congressional hearings with searing take-downs, Scientology’s IRS taxable status revoked, and then all this has to culminate in a glorious climax where top Church of Scientology leaders are imprisoned for their crimes.

But will this orgiastic apogee ever occur?

Now, I know you’re excited. I don’t want you to fly into a frustrated rage at me or anything. Or come at me like Brett Ratner.

But No. Your anti-Scientology climax won’t be happening.

There are no indications that the climax will ever occur now or in the future, either.

It’s so frustrating for anti-Scientologists that after this whole global Anti-Scientology media fantasy has come true, not even the LA Times is falling in line behind Tony Ortega’s spooge dream:

Answer: Reality has set in.

Apparently, it turns out that you can’t try the 2 decades old Lisa McPherson Atrocity Story in court.

There’s nothing prosecutable there. Plus, the family already settled decades ago.

You can’t get Child Services to raid the Church of Scientology for crimes against children because they don’t employ children, and haven’t for more than a decade.

You can’t get the FBI to raid the RPF for slavery, false imprisonment and human trafficking because the RPF disbanded 5 years ago. And anyway, the FBI has already investigated Scientology for human trafficking 10 years ago and nothing prosecutable was found, and so no charges were filed.

Apparently, you can’t even get anyone arrested for forced abortions by Scientology because even those, by all available evidence, have dried up as well.

The Stickiness of Anti-Scientology Beliefs

Any Ex-Scientologist knows what happens when you experience a loss of faith, and your belief system collapses on you.

It’s a devastating thing for anyone. But many Exes pick up a new set of crusading beliefs after Scientology, and continue right on with their dream of a cleared planet. But this time, it’s a apostatic dream of a planet cleared of Scientology!.

“There have been no charges filed against Scientology because Scientology bribes the LAPD with fundraisers and overtime work for off-duty police officers!”

“Scientology has so much political power they can shut down an FBI investigation!”

“The LA Times doesn’t report breathless and hysterical stories in Scientology because David Miscavige lives there!”.

Who knows what props up that last one. But I’m sure someone will come up with something that keeps the anti-Scientologists believing in their fever dreams. Evidence?

What bothers me so much is that Ex-Scientologists – people who have been there, done that, and gotten a burn-scar from it – actually fall right into believing this stuff again, but from the opposite side this time. It’s the same pattern of self-righteous, justified and rationalized belief masquerading in their minds as PROVEN FACTS.

Why do Ex-Scientologists fall for all this sloppy reasoning AGAIN?

What if, instead of believing in MIND CONTROL and BRAINWASHING and all the superstitions and conspiracy theories for which no evidence whatsoever exists – you believed this, instead:

“I got involved in Scientology because on some level it was working for me, providing me with something I needed at the time.

And when it stopped doing that for me, I left.”

What if, instead of BRAINWASHING CULTS and all the other hysterical superstitions that people are peddling about Scientology and your own time in it, you just began there?

I’ll tell you what would happen: Anti-Scientology would be over. And all the hysterical anti-Scientologists such as Leah Remini and Mike Rinder and Tony Ortega and Chris Shelton who have all the hate websites put up about them by Scientology would have no recourse to get them taken down, because no one would be hysterical about Scientology any more. And so anti-scientologists would be stuck with nobody to follow them around in an angry, self-righteous rage.

And that would be a shame.

But at least, as an Ex-Scientologist, you wouldn’t be lying to yourself any more.