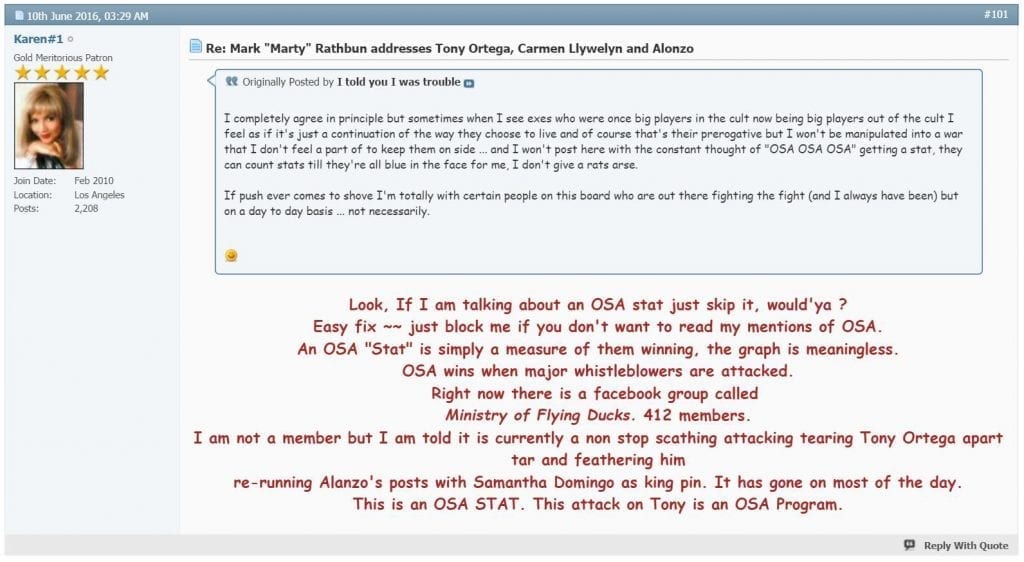 See it for yourself:

The people who used to run Scientology at the top of the organizational chart have been indoctrinated to suppress criticism. They’ve been trained and thought-reformed to within an inch of their lives to see criticism as an incipient enemy, which, if not stamped out immediately by any means necessary, will destroy everything.

Apparently, Karen has not yet learned that criticism is a good thing, not a bad thing. Criticism is a way to point out when important expectations are not being met, and hopefully, point the way for those expectations to be achieved.

To that end: I have an after-cult pink sheet item for Karen DLC: What is Criticism?

Karen: Please read the above and then do a clay demo on how those same principles can be applied to L Ron Hubbard, Scientology, and even to Tony Ortega and what he writes, as well.

I am glad you feel you can speak your mind on Ducks. And yes- how does someone who is not even a member claim to know what we are about on there ? Sam actually spends very little time in the group- she works tirelessly behind the scenes on the Je Suis campaign- at her own expense and leaves the admin stuff to others- including me. I am quite happy to take responsibility for anything and everything that is posted on there. Quite frankly- I am tired of Sam being demonised- she is one of the most genuine people I have ever met and her story regarding her own experience in scientology broke my heart. I am massively insulted at the implication from Karen that I am incapable of thinking for myself and am taking orders from Sam Freeman. For the record- my personal scientology story is that I was the partner of a scientologist for 7 years and refused to join. I had to resist constant attempts to make me join and take courses- I was insulted and belittled for not doing so- but I stuck to my principles, despite the pressure of threatened disconnection . As such, I think I can say I am very self-determined and not easily influenced. Karen should bear that fact in mind before classing me as a mere mouthpiece.

I am an admin on MInistry of Flying Ducks- the group was formed so we could be free of censorship- from individuals and groups who were exploiting the victims of scientology for either self-promotion or money or both- It’s as simple as that. I just laughed when I saw we are being paid by OSA. I am an ordinary WOG- I doubt OSA would have the slightest interest in me. I’m off to check my bank account though- just in case I missed something……..

no clears or ot’s/

It is really strange or weird that both Karen and Bunny Skull of ESMB have such vitriolic disdain for Carmen Llewellyn. It’s almost tempting to wonder if there is some back story to this. Or are they just so protective of Tony O that if anyone even hints that he may be imperfect they go into a conniption fit?

Remember Karen saying that the Facebook account “Ministry of Flying Ducks” is running a non-stop scathing attack on Ortega? She even said they are “tar and feathering him”, and of course it’s an OSA Op. Well, it turns out that Tony Ortega himself is a member of that Facebook group! LOL…

This has been revealed by LuLu Belle of ESMB…

Other members of this OSA run Facebook group are:

I’m a member of the Ducks. Sam is hardly the “kingpin” and the de riguer topic of discussion is hardly how bad Tony Ortega is. I’ve been able to speak my mind there, despite the fact that I differ from other members. I have never had any relationship to OSA, inside or out of the cult.

In contrast, you rule Outer Banks with an iron hand, banning people for disagreements and other perceived or trumped-up offenses. I have found myself greeting people you have ushered in, only to find that you’ve ejected them within a few days!

In one short post, you at once accuse critics of being OSA-helpers for attacking other critics and then you attack other critics. You say when critics attack each other, they’re scoring points for OSA, then you proceed to cast unfair aspersions on a group of diverse people and single out Sam, who has been fighting a valiant fight against the cult.

You note that you’re not a member of Ducks, then proceed to claim you know what’s being said there. This reminds me of how Scientology deals with critic books and documentaries: “I’ve never read it or seen it, but it’s all lies!”

In Outer Banks, I have witnessed you blocking, banning and otherwise controlling information. You seem perpetually offended and frightened of others’ opinions, posts and ideas.

As you are well aware, information control is one of the glaring earmarks of cult behavior.

As to critism of Tony and others, some of it is valid, some ridiculous and reactive. But any of it should be open for free discussion and opinions without retribution and accusations of helping OSA score points.

Two top Bunker posters, and former Tony supporters have escaped Tony’s board. Miss Tia even closed her Disqus altogether. Why can’t this be addressed? What is so frightening about it?

Tony is doing amazing work, exposing the cult. He is by no means perfect. He is nasty to individuals on his board. He made up a bizarre reason to ban Media_Lush. He has been rude to me on several occasions. I’ve also witnessed him attacking individual posters for reasons I can’t fathom. He is intolerant of opposing viewpoints.

While I disagree with the idea of the Bunker having a hive mind, there are obviously followers of Tony who “Yes-Man” his every post and who gush. about him. (Miss Tia was one of them, just a few days ago!) There are simply too many individuals at the bunker, and as you may have gathered, I don’t fall in line with everything Tony says.

Carmen’s latest online melt down and demands of retribution and apologies are ridiculous. She is threatening a major lawsuit against Tony and others for expressing a negative opinion about her online. How very Scientology-like!

I am grateful, Karen, that you have used your position and knowledge to expose the cult. Your videos are insightful and serve as a warning to anyone about to get sucked into the Scientology’s scam and death grip. I am heartbroken at your personal story and applaud your Phoenix-like rise from the ashes of what could have been a immolated life.

Please stop marring your otherwise stellar presence in the community with this nonsense!

It has been per word.

But they gave me a raise.

I have to write a bunch more copy to get the same pay.

I think I’m going to write an “Orders, Query Of”.

Because this is exhausting.

Does OSA pay you per word or per line?

“Indy OSA” is a term I used to describe the actions of Marty, Mike, Karen DLC and Mike Laws when they first emerged from the Church after decades of Int Base brainwashing.

Their particular brainwashing consisted of the high level thought and behavior patterns necessary to run OSA and RTC.

The idea that they would NOT dramatize their Scientology indoctrination, once they organized themselves as Indies to save the planet in a two front war, is not credible. It’s what happens to people, sometimes for years, after leaving a cult.

The role-playing scenario they faced was dire. As the heads of the Independent Scientology Movement, the stakes were heavily against them. They had a two-front war on their hands and the survival of every man, woman, and child on the planet was at stake.

Their Two Front war consisted of:

1. The war against the whole track SP David Miscavige who was squandering Scientology, Mankind’s only hope.

2. The SP critics who were besmirching the good name of L Ron Hubbard and the technology of scientology, and wrecking the Scientology brand.

They believed at that time that the only thing wrong with Scientology was David Miscavige. And they certainly did not want anyone criticizing L Ron Hubbard, the technology of Scientology – and especially themselves – on their mission to save the world as the vanguards of the New Independent Scientology movement.

It was an amazing thing to watch. I have been referring to Indy OSA in just small mentions in other posts.

But Karen, for some reason, still seems to have some dramo left inside her, as we can see from her latest attempt to squelch criticism of Tony Ortega’s denigration of Exes.

This might be the last Scn fireworks dramo-show left to see.

So scooch over and pass the popcorn.

Hi Alanzo, never-in but long-time “watcher”, I was quite AMAZED to hear you tell of “Indie OSA” on a previous post, which Karen was apparently knee deep in along with Rathbun and Rinder a few years ago. I had honestly never heard of such a thing. Of course Marty to his credit saw the trap he’d fallen into when Jim Logan (was that his name?) and the Milestone Two crowd cast him out as a lost heretic. It seems that Marty (and Mike) now understand that the cult philosophy will inevitably just produce the same old shit with different operatives and a different Big Leader.

But a blog post explaining what Indie OSA was (they didn’t literally call it that, did they?), who was involved and how it came to an end would be very interesting.