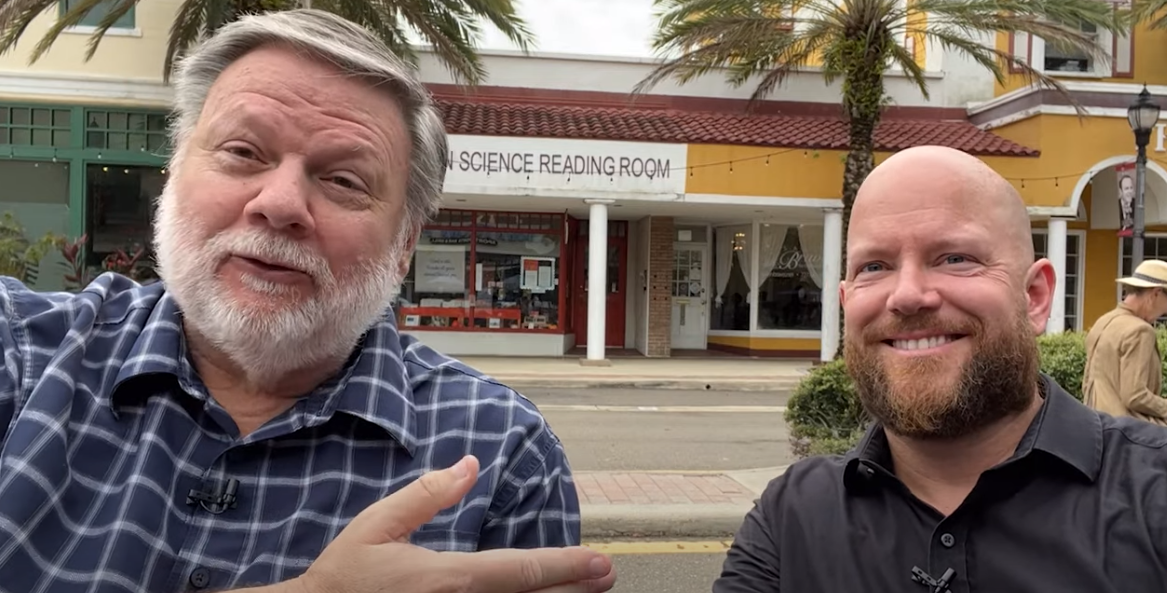 A couple of days ago Aaron Smith Levin and Mark Bunker released a video promoting each other for seats on the Clearwater City Council.

Why should you elect them, they argue?

Because they’re Scientology critics and they’re going to “do something about Scientology” in Clearwater.

Mark Bunker has been a Clearwater City Councilman since March of 2020. Mark admitted during this video that the Cult City Tours fiasco, which claimed that “Scientology Can’t Be Prosecuted”, was his brainchild. The slur company held a tour of Scientology properties in March of 2021 where one of the tour participants caused over $2000 dollars worth of criminal damage to property and netted the perpetrator a felony criminal mischief charge.

Mark also listed his accomplishments during his over year and a half stunt stint on the Clearwater City Council: Passing an ordinance that allows Clearwater citizens to raise up to 4 chickens in their back yards.

What has he accomplished with regard to his nebulous claim of “doing something about Scientology”?

He said he was able to interview people for various candidates for city employment positions, which any Clearwater City Council person would.

How was this was “doing something about Scientology?”

So in the wake of all this failure in “doing something about Scientology”, Bunker created a video to promote his fellow Scientology ‘critic’ Aaron Smith Levin in his run against Lina Teixeira for Clearwater City Council Seat 5.

Aaron has released videos recently claiming that he wants to bring about criminal prosecutions for Scientology and get their tax exempt status revoked. He claims that the only way to get law enforcement to do anything about Scientology’s unspecified (by him) crimes was to create a demand locally – only then will the federal law enforcement act.

Kyle Brennan’s Death and the Church of Scientology

Kyle Brennan died of a gunshot wound to the head in the Clearwater Avenue apartment of his father, Tom Brennan in February of 2007. Tom Brennan is a very loyal Scientologist, so loyal that he was the personal assistant to Denise Miscavige Gentile, David Miscavige’s twin sister.

Aaron Smith Levin has gone to great lengths to characterize Kyle Brennan’s death as a “suicide”. If Aaron was just a normal civilian of Clearwater, and not a critic of Scientology as he claims, who could blame him? Like most of Clearwater, all he would know is that the local judge ruled Kyle’s death a suicide, and a wrongful death lawsuit brought by his family was thrown out by the same local judicial network that got the Church of Scientology’s criminal charges dropped in the death of Lisa McPherson.

Aaron doesn’t claim to be a normal Clearwater citizen, though. He claims to be an experienced Scientology critic who is going to ‘do something about Scientology’ by exposing their crimes, if you’ll only elect him.

Why then, would Aaron, for instance, characterize the 2007 death of Kyle Brennan as a suicide when all of the evidence in the case points to murder?

Evidence in the Death of Kyle Brennan

If Aaron Smith Levin is really a critic of Scientology, why would he distract from and bury these facts?

If you think this is not intentional, that the death of Kyle Brennan just slipped these “critics'” minds, here’s more:

It’s the featured picture on this post above. I want to point this out to you again, Clearwater:

See that building across the street in the background of these “Scientology Critics”? It’s The Colony Building at 423 Clearwater Street in downtown Clearwater.

The Colony Building is the building where Kyle Brennan died.

Did these two “critics” of Scientology mention this while talking about how they’re going to do something about Scientology by exposing their crimes on the Clearwater City Council?

There’s something wrong with your critics of Scientology, Clearwater.

You should take notice.

Michelle Sterling Allows ESMB to be Filled With Spam

What Are AntiScientologists & the AntiCult Movement Trying to Achieve?

Alanzo ·
@AlanzosBlog
Best definition of a "Cult" by an actual cult expert, Dr. Eileen Barker of the London School of Economics and @InformReligion

What is a cult?
https://t.co/NIPGsw5eMI
View on Twitter
0
1
Alanzo ·
@AlanzosBlog
"After five days of deprogramming, I “woke up” and emerged from being a “model Moonie” and leader to a very upset, confused, angry, ashamed self."

After 5 days of forced deprogramming, @CultExpert wants you to be ashamed of yourself, too.

https://t.co/2doo1dpt6j
View on Twitter
0
0
Alanzo ·
@AlanzosBlog
What mainstream society does to minorities - if they are allowed to.

Be vigilant and protect the rights of minorities to maintain a free society.

He'll never miss an opportunity to ratchet up the threat you feel from #Scientology & Scientologists who never harmed anyone & never would. https://t.co/FXeqtdMe4L
View on Twitter
Tony Ortega@TonyOrtega94
One of the more common questions we get from people learning about #Scientology is the phrase you often hear from the church about "clearing the planet." What does that mean? Is it as ominous as it sounds?

Oh yes. It very much is.
0
0
Alanzo ·
@AlanzosBlog
What are the #ThoughtTerminatingCliches of #AntiCultism? https://t.co/P514Q2N9IK
View on Twitter
Sarah and Nippy @alittlebitculty
What are some of the common Thought Terminating Cliches that you’ve heard over the years?