“A former member of the Church of Scientology (CoS) said he was “actually appalled” looking at a video played in the High Court of him following two church members distributing booklets in Dublin.’

“Peter Griffiths (63), who is currently unemployed and living in Ballina, Co Mayo, told the court that looking back now at the video he felt the two CoS members, Zabrina Collins and Michael O’Donnell, “are due an apology for what went went on.”

“The video, shot by Mr Griffiths in December 2014, was previously found by a judge to clearly show Mr Griffiths had consorted with another former CoS member, John McGhee, from Clara, in Co Offaly, in assault and battery on Ms Collins and Mr O’Donnell as they distributed CoS-funded “Truth about Drugs” booklets to businesses and homes in Dublin.”

“I hold my hand up and regret my role and I think it was terrible”.

“At the time the video was shot by him, in December 2014, he said he was “living it” but he believed now he should have stopped Mr McGhee from doing what he was doing.”

“Ms Collins said at one point she was hit in the face by Mr McGhee when he reached over her shoulder to try to grab her booklets….

<<<—————————>>>
We’ve written here before about John McGhee. And now it’s his friend Pete Griffiths assault and battery against Scientologists on the street that is ending up in court – an incident where it appears that McGhee was the one doing the assaulting on Scientologists while Pete aggressively filmed it.

I don’t think this is any kind of Ex-Scientology that anyone should ever be part of.

Here might be the video they showed in court. Is the Ms Collins in this video the one who was allegedly assaulted, as mentioned in the article? If so, it’s possible that Pete Griffiths and John McGhee have edited out the criminal act in this video at the 2 minute point.

The whole feeling of this video is that a criminal act is about to take place. These guys are extremely aggressive. You can feel the hate they have for these Scientologists. They have taken anti-Scientology to a whole new level of pathology.

Even without the physical assault, the verbal assault is disgusting on this woman – solely because she is a Scientologist.

This kind of behavior must be prosecuted to the fullest extent of the law. And all anti-Scientologists should see this video and decide for themselves if this is the kind of anti-Scientology activity they want to promote against Scientologists.

Here’s some of the discussion right now over at SPs-R-US, Pete Griffiths’ Facebook group. Tony Ortega weighs in. 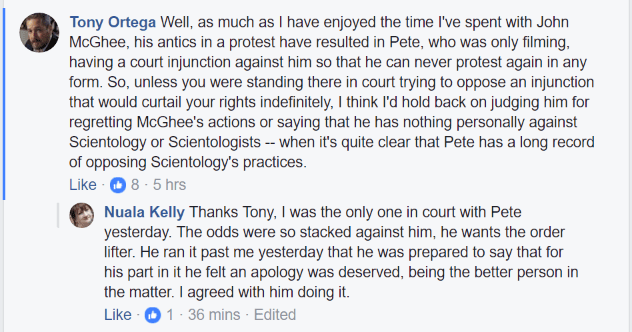 Do you think Tony Ortega will write about this, or will he sweep it under the rug?

Dave Gibbons gives, what I feel to be, a very sane comment about Pete Griffiths assault and battery. But Perry Ley Nor, an admin in the group, gives him a stern warning.

See how Brian Collinge, a person who often goes on these aggressive protests with these two, justify this behavior for the group. 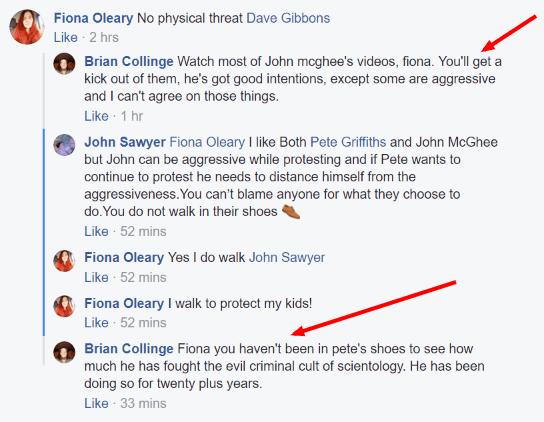 This is how you process clear evidence that your tribe is going off the rails. You find ways to justify it, to make excuses for it, and convince others who are concerned or disgusted that it really wasn’t that bad. It was done in Scientology, and it is being done in anti-Scientology, as well.

From looking at these people justifying for Pete and John, do you think this behavior from anti-Scientologists is going to get any better?

And now, Pete himself has weighed in online over his testimony in a legal matter that has yet to reach a verdict. I think that if I was Pete’s attorney I would strangle him at this point for doing this, and no court would charge me for assault and battery. 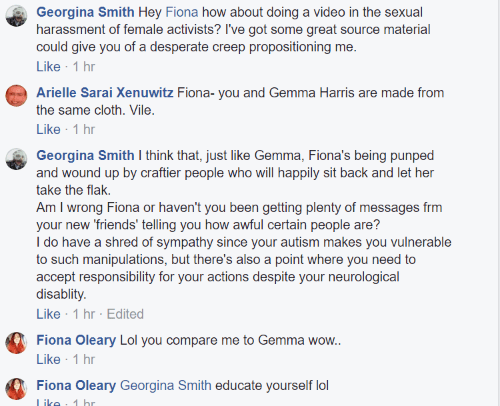 I believe that Arielle Sarai Xenuwitz is Tony Ortega’s wife. Imagine that.

And here’s a veiled threat of violence on Fiona for disagreeing with violence against Scientologists in Pete Griffith’s Facebook group.

These people are great, huh? As Exes, did you ever think that you would leave one crazy, intolerant group, just to go over to its opposite side – which is just as crazy and intolerant?