Pyrrho – (c. 360 BC – c. 270 BC), a Greek philosopher who was a student of Eastern philosophy and is credited as being the first true skeptic.

I’ve just listened to a fantastic podcast on the history of skepticism. In fact the whole BBC series “In Our Time” with Melvin Bragg will probably knock the socks off of most Ex-Scientologists I know.

Since ancient times, skepticism did not mean to simply debunk, refute, or sneer at a certain belief or philosophical position, but to question and scrutinize ALL beliefs and philosophical positions (all human knowledge, in fact) while holding no belief or position of one’s own. The main theme of ancient skepticism questioned whether human beings were capable of knowing anything at all, especially knowing anything with certainty.

Their main claim, after blowing your mind with devastating questions that would get you to question the existence of your own hand, was that no belief or philosophical position can stand up to disciplined logical scrutiny. And, they said, once you begin to realize this, you begin to cool out on lots of things, and life gets a lot less tribal, and a lot more more tranquil for you.

True skepticism holds no belief at all, knowing that all beliefs (including atheistic ones) can not stand up to scrutiny.

Pseudo-Skepticism, then, is the use of skeptical questioning only against beliefs that are not your own.

After having their beliefs demolished by the ancient Greek skeptics, the early Catholic Church was the first to practice pseudo-skepticism. They taught their followers to use skeptical inquiry only against “The Pagans” while never allowing that same inquiry to be used against their own beliefs.

It was quite a trick that is still in use today.

Very unfortunately, modern skepticism has devolved into a kind of sneering contempt for another belief or philosophical position than one’s own. It’s used most famously today by “The New Atheists” such as Richard Dawkins and Lawrence Krauss who go on the road calling themselves “unbelievers” while still holding all kinds of atheistic beliefs themselves. Even one of my heros, Michael Shermer, has fallen into pseudo-skepticism – and he’s the head of the Skeptic’s Society!

Still, after 2500 years, no one is getting closer to the truth, it seems.

Where you find pseudo-skepticism in full bloom today is in the area of Scientology criticism. No where will you find “skeptics” who are so certain of their beliefs that Scientology is a “criminal organization”, for instance, which is involved in all kinds of “criminal activity” in present time. This certainty remains even after realizing that no church official has been convicted of a crime since the late 1970’s, and that civil cases against them for “human trafficking” and “fraud” and all kinds of other “crimes” are getting thrown out of court.

With all these legal decisions in favor of Scientology, and all these missing criminal charges, shouldn’t these facts inform the pseudo-skeptics of the weakness of their position?

Obviously not. Their faith-based crusade against Scientology as a “criminal organization” continues.

The key characteristic of a pseudo-skeptic of Scientology is the furious and dedicated certainty of their position, and their squinting suspicion that anyone who would question it must be an OSA agent.

How Do You Handle Facts That Challenge Your Beliefs?

As you’ve seen if you were involved in discussing the recent US election, just because a fact is presented to you, that does not mean that you will look at that fact and accept it as such – especially if that fact calls into question your own beliefs or worldview.

It takes great discipline for any human being to not look away from facts that run against their own belief system. Most people simply ignore and discard facts that call into question their present religious and political beliefs.

Any Ex-Scientologist should humble themselves by looking at the way they handled facts when they were a Scientologist. They might ask themselves if they are still handling facts that way in their new life as an anti-Scientologist, or an Indie, or a Buddhist, a Christian, or an Atheist.

If they have never examined how poorly they have handled facts that challenged their present belief system, then it is highly likely they are just as much of a blind fanatic against facts today.

Probably no one has ever had their worldviews tested and collapse on them like an Ex-Scientologist has.

Atheistic never-in anti-Scientologists can be the most arrogant and intractable pseudo-skeptics of all because they think that science answers questions for them that it actually doesn’t answer. Being so cock-sure, and confirming each others’ confirmation biases of their beliefs between themselves, they never notice that.

So cultivate the courage be a true skeptic. 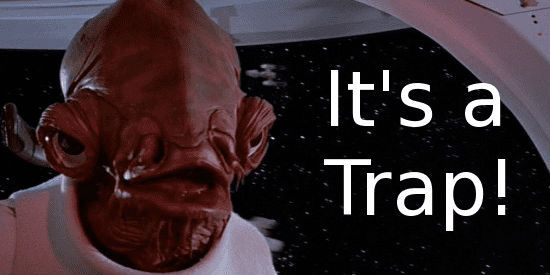 Scientology is a Trap